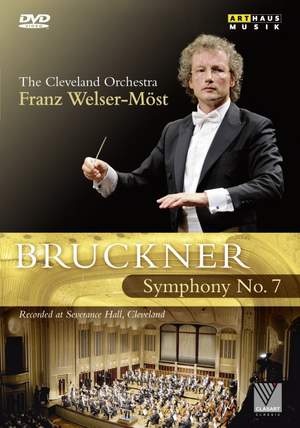 …a wonderful performance of Bruckner's most popular symphony, delivered in what appears to be a building with ideal acoustics. …the camera-work is restrained, not restless as it so often is,... — BBC Music Magazine, February 2010, 5 out of 5 stars More…

With the mighty build-ups and monumental fortissimi of Bruckner‘s Seventh, Welser-Möst and his Clevelanders have their work cut out for them. And they do not disappoint. The most popular, and perhaps most easily accessible, of Bruckner‘s symphonies, the Seventh casts its spell on the audience with its clear-cut architecture and the wealth and fullness of its melodies. From the sweeping opening theme of the fi rst movement to the victorious chords of the finale, the Cleveland Orchestra and its conductor deliver a magisterial reading of Bruckner‘s masterpiece. Cleveland‘s Severance Hall is the venue for this performance. This hall, an eclectic yet elegant mix of Art Deco, Art Nouveau, Classicism, Egyptian Revival and Modernism was inaugurated in 1931 and is still hailed today as one of the world‘s most beautiful concert halls. The Cleveland Orchestra, founded in 1918, began its ascent to the upper ranks of the world‘s ensembles after it moved to Severance Hall in 1931.

“Calm and composure are his trademarks, along with a supple, elegant, and exemplarily precise beating which should not be confused with distance and coolness. Again and again, lightning bolts of violent attaccas leap forth to set bold accents, build up towering mountains of sound, or to aim for monumental heights.” (Vienna’s Die Presse)

…a wonderful performance of Bruckner's most popular symphony, delivered in what appears to be a building with ideal acoustics. …the camera-work is restrained, not restless as it so often is, and the players are evidently listening to one another, and watching Welser-Möst closely. With the sublime slow movement, Bruckner's elegy for his beloved Wagner... the emphasis is on celebration rather than grief. Its climax, where Welser-Möst includes the controversial cymbal clash, is as ecstatic and elevating as any rendition I've heard.