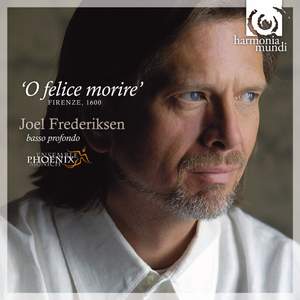 "I have great pleasure in providing a few introductory words for this most engaging programme, as it recalls much delight I enjoyed when first I began to work with this area of repertoire about thirty years ago . . . This CD explores this particular area of virtuosity in a very engaging survey of highly ornamented yet deeply expressive music. From the suave complaint of Sigismondo D'India, Che farai Meliseo where the singer needs the agility of a nimble mountain goat, to [the virtuoso singer], Giovani Puliaschi's subterranean exploration, Locar sopra gl'abissi that resonates like some dark cavern, by way of the sublime 'crooning' of Caccini's Muove si dolce, the listener is in no doubt that in this repertoire at least, the empty bragging of Brancaccio is left far behind - and the comic bass buffoonery lies elsewhere and in the future.The quiet virtuosity of poetry is sublime, opening out into moments of profound declamation." Anthony Rooley

Giulio Caccini and the early Italian Baroque singer-songwriters have fascinated and challenged Joel Frederiksen for the past 20 years. For the most part they are the inspiration and subject of this CD. Men like Caccini, but also Giovanni Kapsberger and Giovanni Puliaschi, were singer-player-composers who wrote in a revolutionary way for the bass voice and accompanied themselves on the lute. Joel has attempted to recreate this performance ideal by accompanying himself on the archlute (which combines attributes of the lute and harp) and immersing himself in repertoire which flowered between approximately 1580 and 1620. After moving to Munich, Joel Frederiksen established Ensemble Phoenix Munich in 2003 for the recording of his first solo CD Orpheus, I am, a CD of Renaissance and early Baroque music, from England, Italy and France.The ensemble is heir to his previous group, L'antica musica New York, 1989-2001. It presents a wide range of programmes from the Renaissance and Baroque, and from Early America c.1800-1900.