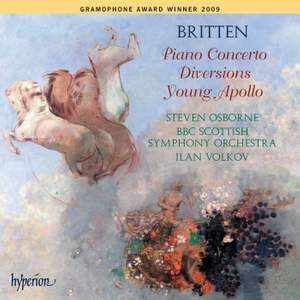 Steven Osborne and Ilan Volkov launch into the Piano Concerto's opening 'Toccata' at a headlong pace… For all the remarkable velocity, the playing has weight and incisiveness too, and Osborne's... — BBC Music Magazine, September 2008, More…

Ahead of his Proms performance tonight, the pianist talks to Katherine about the Piano Concerto.

The three compositions which comprise Britten’s music for solo piano and orchestra constitute a unique, yet still little explored, part of his output. Here they are brought together in a stunning disc that pays tribute to the great artistry of all involved.

Steven Osborne’s performance of Britten’s Piano Concerto with the BBC Scottish Symphony Orchestra under Ilan Volkov at the 2007 BBC Proms redefined this often undervalued work in the ears of his listeners, imbuing it with hitherto unsuspected emotional and musical weight; playing the bravura passages with glittering assurance and joie de vivre. The same musicians have put down a benchmark recording here.

Diversions for left-hand piano and orchestra is a gem of a piece, which has rarely been recorded. It is highly virtuosic and incredibly well laid out for the left hand, at times almost in the form of études for piano and orchestra. Britten reaches unexpected levels of emotional intensity, most notably in the Chant and the powerful Allegro.

Seventy years or so after these works were first performed, their freshness and vitality speaks with the same musical truth that Imogen Holst divined in Britten’s work, when, writing to him after attending an early performance of Peter Grimes, she said: ‘You have given it to us at the very moment when it was most needed.’ In revisiting these unjustly neglected early works, and, through performances of matchless brilliance, discovering qualities that were missed or overlooked when they first appeared, we have good cause to echo her sentiments.

Steven Osborne and Ilan Volkov launch into the Piano Concerto's opening 'Toccata' at a headlong pace… For all the remarkable velocity, the playing has weight and incisiveness too, and Osborne's way with the two central movements is equally sure. Diversions... a beautifully devised single-movement set of variations presents Britten's inventiveness at its most elegant. Osborne and the orchestra do this neglected jewel excellent justice.

Commissioned as a 24-year-old to compose and perform a piano concerto for the 1938 Proms, Britten played safe. None of the edginess he might have filched from Bartók or Stravinsky, no Bergian angst: instead, the models are Prokofiev, Shostakovich and Ravel, and in these terms he doesn't miss a trick, at least before the finale's rather perfunctory final gallop. Most of the piece takes a genuinely fresh look at pianistic conventions, and Steven Osborne yields nothing to the great Sviatoslav Richter in the punchiness and fine-tuned filigree of his playing. No skating over the surface here, with Ilan Volkov and the BBC Scottish SO adept at teasing out the music's symphonic subtext, as well as its piquant orchestral effects.
Britten replaced the original slow movement in 1945, possibly because it spent too much time in waltz-like regions already visited in the second movement. This disc adds it anyway, alongside two other scores for piano and orchestra.
Young Apollo (1939) was not heard for half a century after its premiere, perhaps discarded by Britten because its fanfare-like material was more effectively deployed in Les illuminations (also 1939). It's a quirky piece, difficult to programme, a euphorically unguarded response to Keats's vision of male beauty in Hyperion.
Diversions is on a much grander scale, its style making even clearer those debts to Mahler which Britten had allowed to surface now and again in the concerto. The multifarious challenges to the single-handed soloist create moments of strong emotional depth and, as throughout the disc, Osborne and his colleagues make the best possible case for pieces which have tended to be placed on the outer fringes of the Britten canon. The recordings, made in Glasgow's Henry Wood Hall, have ample depth of sonority and vividness of colour.

…throughout the disc, Osborne and his colleagues make the best possible case for pieces which have tended to be placed on the outer fringes of the Britten canon.

Osborne exults in Britten’s dazzlingly pianistic writing, and we get to hear the original 1938 version of the concerto’s third movement, a dazzlingly beautiful Recitative and Aria … a thrilling disc

It's the concerto...that is the real draw here, for Osborne's account has such deftness and wit that its only possible rival on disc is the performance by Sviatoslav Richter with Britten conducting.

The rapport between soloist and orchestra is often electrifying, especially in their fervent performance of Young Apollo, and the variations in Diversions ("Romance", "March", etc) are well differentiated.