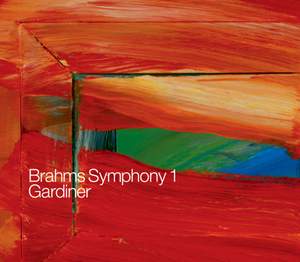 Recorded live at the Royal Festival Hall, this first instalment in a complete Brahms cycle may not offer the technically immaculate playing of some rivals but outstrips most of them in its immediacy.... — BBC Music Magazine, November 2008, 5 out of 5 stars More…

Following on from John Eliot Gardiner’s critically acclaimed recordings of the symphonies of Beethoven and Schumann, SDG are proud to be releasing the first disc in a new series exploring the music of Johannes Brahms. Recorded live during last autumn’s Brahms and his antecedents tour, and showcasing the four symphonies as well as Brahms’ major choral works, this series is an important milestone for SDG heralding the development of the label beyond the music of Johann Sebastian Bach and the Renaissance choral repertoire which have so far dominated its catalogue. The first release in the series coincides with the second part of Gardiner’s project, which will be touring extensively in Europe in the autumn.

Brahms’ large-scale music is brimful of vigour, drama and a driving passion - says John Eliot Gardiner in his introductory notes. One way to release these characteristics is, for the conductor, to set his symphonies in the context of his own superb and often neglected choral music, and that of the old masters he particularly cherished and studied (Schütz and Bach especially) and of recent heroes of his (Mendelssohn, Schubert and Schumann). “This way”, says Gardiner, “we are able to gain a new perspective on his symphonic compositions, drawing attention to the intrinsic vocality at the heart of his writing for orchestra”. Composing such substantial choral works as Schicksalslied, which also features on this release, gave Brahms invaluable experience of orchestral writing years before he brought his first symphony to fruition. Solemnity, pathos, terror and jubilation are all experienced and encapsulated before they come to a head in the finale of the first symphony.

The conductor himself chose the illustrations for the covers of this series, paintings by Sir Howard Hodgkin (who is Gardiner’s first cousin), as the layers of intense colour in the acclaimed painter’s work seem to Gardiner to perfectly match the marvellous different layers of sound in Brahms’ orchestra. Inside the same elegant packaging used for the Bach Cantatas CDs, the liner notes feature an in-depth conversation between John Eliot Gardiner and composer Hugh Wood.

Recorded live at the Royal Festival Hall, this first instalment in a complete Brahms cycle may not offer the technically immaculate playing of some rivals but outstrips most of them in its immediacy. Enhanced by equally powerful accounts of the rarely heard Begräbnisgesang and the Schicksalslied, this is one of the most stimulating Brahms releases to have appeared in recent years.

Part of a project whose purpose is to contextualise Brahms's four symphonies and GermanRequiem, this is a record that needs to be heard chronologically and complete, not cherrypicked for individual items.
Sir John Eliot Gardiner's project promises to bring into play the work of Schütz, Palestrina, Brahms Orchestral 247 and Bach, along with choral pieces by admired contemporaries. Here Felix Mendelssohn is the representative 'other', his superb Mitten wir, composed three years before Brahms's birth. It is flanked by Brahms's Begräbnisgesang (1858), a threnody for chorus, winds and timpani that openly anticipates the second movement of the German Requiem, and the sublime yet troubled Hölderlin-inspired Schicksalslied ('Song of Destiny', 1868-71) which can be seen as a pendant to the Requiem.
Brahms's setting of Hölderlin's poem was controversial.
Where Hölderlin supplants his opening vision of celestial quiet with images of the hell of earthly existence, Brahms ends by revisiting that celestial vision in a ruefully beautiful orchestral coda in C major. Schicksalslied tells us a good deal about the First Symphony. In Gardiner's powerful juxtaposition, the descent from that rueful C major coda to the C minor of the symphony's tumultuous opening is a true coup dethéâtre, the terrible enactment of another Fall.
These are intensely dramatic performances, powerful and unmanicured. The gathering drama of the three choral pieces is channelled and unleashed in a towering account of the First Symphony's opening movement. When Klemperer conducted the symphony in Los Angeles in 1941 a player recalled: “He drove, as in a huge chariot, to the highest planes of expression.” There is something of that spirit here in Gardiner's gaunt, no-holds-barred account of the work.
The use of period instruments and their deployment in the brooding acoustic of Paris's Salle Wagram are clearly factors in the performance's wider impact. It has to be said that the playing in the symphony's middle movements is rather rough and ready. In the third movement, which under Gardiner is neither allegretto nor grazioso, Sir Charles Mackerras's historically informed Scottish Chamber Orchestra version (Teldec) is much to be preferred. Not that comparisons matter. This is a mighty Brahms First which, like the programme it inhabits, is a thing sufficient unto itself.

These are intensely dramatic performances, powerful and unmanicured. The gathering drama of the three choral pieces is channelled and unleashed in a towering account of the First Symphony's opening movement.

The singing of the Monteverdians is luminous

Gardiner's period-instrument textures and no-nonsense tempos buoy up music that can too easily get bogged down...A good start to what promises to be a fascinating series.

Some of the orchestral tempi and texture will startle those who prefer more luxuriant accounts, but the reedy woodwinds and edgy string sound give extra momentum to this reading, which - as always with Eliot Gardiner - is steeped in scholarly preparation.

...[D]ynamic, astringent: admirably transparent in its textures and super-sweet in Peter Hanson's violin solo at the close of the "Andante sostenuto