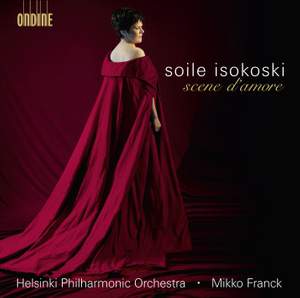 Deploying her well-produced and fresh tone with skill and imagination, Soile Isokoski defines eight lyric soprano heroines, each one quite different. It's a remarkable achievement, underpinned... — BBC Music Magazine, September 2008, 5 out of 5 stars More…

Audiences and critics hail the Finnish soprano Soile Isokoski as one of the finest singers in the world. Her more recent orchestral albums on Ondine have been praised as top-choice recordings and earned the highest distinctions such as the BBC Music Magazine Disc of the Year 2007 Award, a 2007 MIDEM Classical Award and a 2002 Gramophone Award.

This disc features popular scenes and arias from the late-19th century Italian, French and Russian opera marking Soile Isokoski's greatest successes on stage. Included are the famous aria "Sì. Mi chiamano Mimì" from La Bohème, with which Soile Isokoski gave her opera début in 1989, as well as the famous ‘Letter Scene’ from Eugene Onegin, which she sang at the Finnish National Opera, in 2006, to international acclaim. Besides her role debuts as Tatyana, Ellen Orford in Dresden, Christine in Intermezzo at the Theater an der Wien (2008) and Charpentier's Louise at the Bastille Opera in Paris, Ms. Isokoski's engagements until 2009 include Cosí fan tutte in Bilbao and Vienna, Lohengrin in Geneva, La Juive, Intermezzo, Rosenkavalier and Faust in Vienna and Don Giovanni at the MET.

Deploying her well-produced and fresh tone with skill and imagination, Soile Isokoski defines eight lyric soprano heroines, each one quite different. It's a remarkable achievement, underpinned with consistently excellent musicianship.

…the Tchaikovsky would appear to be a role for which she is ideally suited. Her Russian diction seems clear and precise, the voice is admirably steady. The Bizet and Puccini items are pleasant enough, but it is in Verdi that Isokoski is able to demonstrate her dramatic skill. The hopeful, eager tones of Maria in Boccanegra, as she awaits her lover, contrast with the resigned, wounded Desdemona. Recorded sound is excellent.

It would be hard to think of any singer today who sings [the roles of Mimi and Tatyana] more exquisitely…Is there a more beautiful soprano voice in opera today? Listening to her rapt, long-breathed phrasing of Come, in quest'ora bruna, from Boccanegra, and Desdemona's Willow Song and Ave Maria, it's hard to think of one.

One of the finest vocal instruments of the moment, the exquisite soprano of Finland's Soile Isokoski roams amorously through the core repertoire in this outstanding anthology