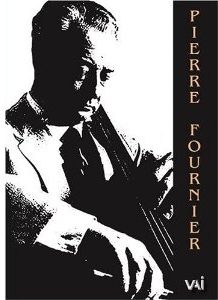 Offer, The Art of Pierre Fournier

Pierre Fournier (1906-1985) was renowned for his elegant tone and impeccable musicianship. He was regarded among his contemporaries as a true aristocrat of the cello. In 1959 and 1960, Fournier visited the studios of Radio-Canada in Montreal for two television recitals: one, a program of music for cello and piano (with Guy Bourassa, piano), featured sonatas by Debussy and Francoeur, and the Adagio and Allegro, Op. 70, by Schumann; the other appearance included two major works for solo cello, the Bach Suite No. 3 and the Kodaly Sonata, Op. 8.