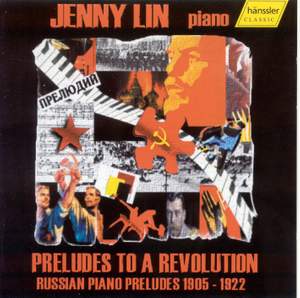 Preludes to a Revolution

Prelude No. 1 in C sharp minor

Prelude No. 2 in D major

Prelude No. 3 in E flat minor

Prelude No. 4 in C minor

Prelude No. 5 in A flat minor

"In the period between the end of the tsarist regime and the seizure of power by the Bolsheviks, the country underwent transformations, as tragic as they were profound, which were later to change the face of the world. For a quarter of a century, the arts became an extraordinarily fruitful field of experiment. Whether conservative or modern, the different aesthetic approaches would overlap, coincide, or confront each other. With its almost sketch-like brevity, its expressive immediacy and its intimate character, the prelude mirrored its age by becoming the ideal vehicle of confession for composers plagued by doubt. The programme on this CD illustrates the development of this elliptical form in the period between 1905 and 1922, two crucial dates in Russian history".