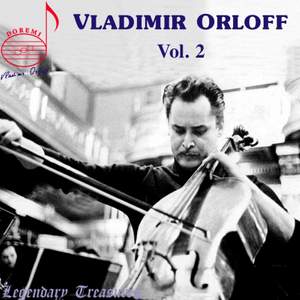 Variations on a Rococo Theme in A Major, Op. 33

One of the twentieth century’s most respected cellists, Russian born Vladimir Orloff enjoyed an illustrious, solo career lasting some 30 years, from the mid-1940's to the mid-1970's. This is the second DOREMI volume that presents a selection from Orloff's solo broadcasts and studio recordings. All items here are first time on CD and digital release. Orloff was a guest soloist with many of the world’s leading orchestras, including the Vienna Philharmonic, Royal Philharmonic and New Philharmonia of London, R.I.A.S. Orchestra, Berlin, The Bayerischer Rundfunk Orchester, and the Copenhagen Symphony Stockholm Radio Orchestra, under the baton of such eminent conductors as Sir John Barbirolli, Sir Adrian Boult, Sir Eugene Goossens, and Mendi Rodan. In 1971 Orloff was invited to join the University of Toronto as a Professor for Cello, a position he held for 25 years. “One of the greatest cellists of our time... focused tone, refined expression” - Le Monde (Paris) “Musicianship of the highest order... a master cellist” - Daily Telegraph (London)