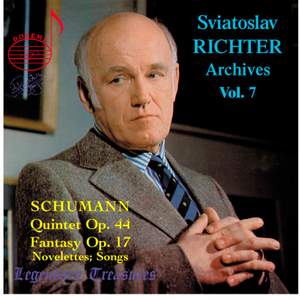 with the Borodin String Quartet

This is the seventh volume of archival treasures by the great Sviatoslav Richter, in state of the art audio restoration. Considered one of the greatest pianists of the twentieth century, Svaiatoslav Richter was known for his virtuosic technique, vast repertoire, and the depth of his interpretations. The eminent Borodin String Quartet is also featured here as well as Richter’s long time partner, Soprano Nina Dorliac. The cornerstone of this release is Schumann’s Quintet for piano and strings in E flat major, Op. 44, which was recorded in Moscow in 1985 and receives here its first release ever. Also receiving its premiere release is his 1980 recording of Schumann’s Fantasie in C major Op. 17.