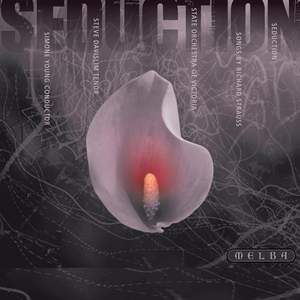 An outstanding recital by an excellent young tenor singing superb Strauss… [Davislim] is worth being spoken of in the same breath as his notable predecessors – Peter Anders and Fritz Wunderlich... — BBC Music Magazine More…

A deluxe edition re-mastered and remixed for SACD surround sound from the original acclaimed recording made in 1999.

CD received glowing reviews and is in the Gramophone Best CDs and DVDs Yearbook.

Steve Davislim is a highly sought after Australian tenor based in Vienna who has established a stellar international career working with the most prestigious orchestras and conductors in Europe, the USA and Australia.

Davislim’s voice is full of colour and warmth and informed in every note by an all too rare combination of intelligence and imagination: “it’s almost enough to make you believe in God” St Petersburg Times.

Recording debut of Australian-born Simone Young, recognised as one of the leading conductors of her generation and Music Director of Hamburg State Opera.

First of a series of five CDs that Steve Davislim is making with Melba, including Schubert’s song-cycle Winterreise and the world premiere recording of Saint-Saëns’ 1-act opera Hélène.

Digipak with picture disc and 30-page colour booklet with essay and aria translations.

An outstanding recital by an excellent young tenor singing superb Strauss… [Davislim] is worth being spoken of in the same breath as his notable predecessors – Peter Anders and Fritz Wunderlich – praise can hardly be higher than that.” Gramophone
“The years drop off Richard Strauss... in this new disc of his orchestrated songs... [Davislim’s] lithe, rhythmically and verbally alert tenor has the red blood surging from the start...