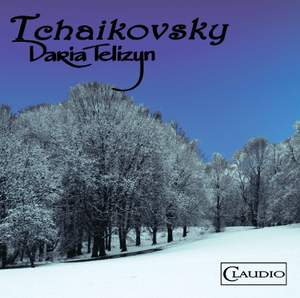 VIII. Waltz of the Flowers

Daria enchanted audiences. The eminent Dutch critic, Jan van Voorthuysen wrote, “Even if I had only heard Liszt's notorious grand Sonata in B minor, I would have been convinced that I have heard one of the greatest pianists. A year ago I heard her first teacher more than once and I am sure he could not have equaled her, for he could not have equaled Horowitz or Andor Foldes, whereas Daria Telizyn did! And with the greatest of ease! After having heard 10,000 concerts, after having written more than 8,600 reviews, and after having heard the Liszt sonata countless times, I feel simply bound to declare that after Daria Telizyn's unbelieveasble performance I feel completely flabbergasted.” She moved to Florida and endured a series of illnesses. She picked up and went back to playing but this was short-lived and she had emrgency surgery in Dunedin, Florida but, sadly, died on 21 March 2005, ten days short of her 45th birthday. She was a woman of great beauty and spirit, a passionate Ukrainian with a talent that was unsurpassed. This release captures her great talent and musicianship as she performs music by Tchaikovsky, including selections from The Nutcracker, Romance Op. 5, Dumka Op. 59, and more.