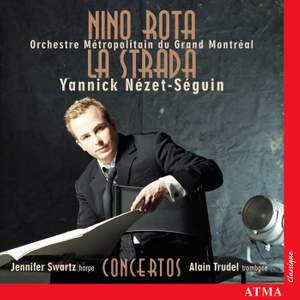 Nino Rota is renowned as a prolific composer of film soundtracks, and is associated predominantly with producers such as Zeffirelli, Coppola, and above all, Fellini, for whom he became the regular composer. As a composer of concert or theatre music, though, Rota is less known outside of his native Italy. Nonetheless, his output for these media totals approximately one hundred “classical” works among which are four symphonies, twelve concertos for various instruments, chamber music, vocal music, twelve operas, and ballet music. This is a chance to discover both these facets of Nino Rota’s art. This first collaboration on disc of the OM and its principal conductor Yannick Nézet-Séguin marks the beginning of a new association with the ATMA label.