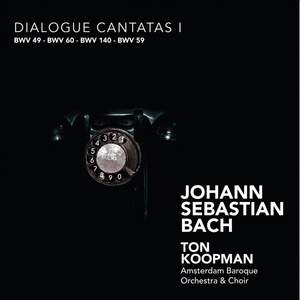 This group of works selected from the award-winning cycle of recordings of the complete cantatas of J. S. Bach by Ton Koopman and the Amsterdam baroque Orchestra and Choir, represent those which set dialogue texts to music. Some of these cantatas were specifically entitled “Dialogus” in Latin or “Dialogo” in Italian as genre designation. This is the case with the Dialogus “Ach Gott, wie manches Herzeleid” (BWV 58), “Erfreut euch, ihr Herzen (BWV 66), “Ich geh und suche mit Verlangen” (BWV 49), “O Ewigkeit, du Donnerwort (BWV 60) and the Concerto in Dialogo “Liebster Jesu, mein Verlangen” (BWV 32).. “Ich geh und suche mit Verlangen” BWV 49 was first performed on November 3, 1726. “O Ewigkeit, du Donnerwort” BWV 60 was written for the 24th Sunday after Trinity and received its first performance on November 7, 1723. “Wachet auf, ruft uns die Stimme” BWV 140 was composed for the last Sunday of the church year, the 27th after Trinity, and first performed on November 25, 1731. “Wer mich liebet, der wird mein Wort halten” BWV 59 was written for Whit Sunday and performed in Leipzig on May 28, 1724, but perhaps also the year before, on May 16, 1723 at the Pauliner Church for the service of the university community, for which Bach was responsible on the high feasts.