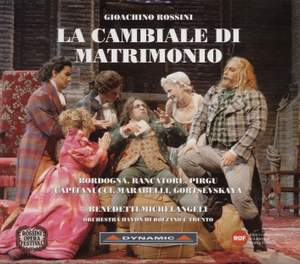 Though La Cambiale di matrimonio may not be an absolute masterpiece, there is no doubt that this is an opera that represented a decisive stage in Rossini’s career.

Melodic invention is clear and crisp, but finds moments of sincere, original inspiration (like Fanny’s beautiful aria, Vorrei spiegarvi il giubilo, or Edoardo and Fanny’s duet Tornami a dir che m’ami,); its dramatic shape owes much to eighteenth-century opera, but the characters (with no exceptions) are not merely stereotypes of a certain manner of being but live authentically on the stage. The strength of these innovative elements was unique in the panorama of Italian opera in the early years of the nineteenth century, and throughout his Italian career (until Semiramide in 1823) Rossini was never to have any rivals that could threaten his primacy.

La Cambiale di Matrimonio marks the beginning of Rossini’s career and the last grand season of the buffo genre. After him only Donizetti will succeed in bringing life to a genre destined to fade away, though with different modalities. Thus while musical Europe trembles beneath the blows of the great Romanticism north of the Alps, Italy finds its own, and at least apparently lighter, way, to express the demands of new aesthetic tastes. Recorded at the Rossini Opera Festival in Pesaro.