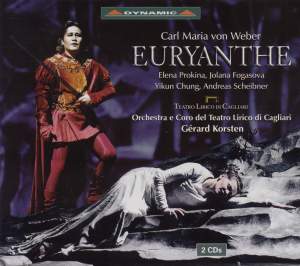 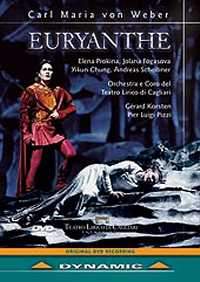 After his success with Freischütz, Weber wanted to write a grand romantic opera and in the end the subject of Euryanthe was chosen, a tale inspired by a legend going back to the thirteenth century. Euryanthe is characterised by music of inspiration and originality such as is rarely found in the history of German opera in the first half of the nineteenth century. The Italianisms that are occasionally glimpsed in Freischütz are eliminated almost completely. Euryanthe is set to music in its entirety with accompanied recitative passages that are often of great beauty. We might say that in an opera that has many experimental features Weber sought for the first and only time in his life to overcome the traditional dichotomy between spoken and sung parts, between recitative and closed numbers, creating a highly supple musical structure in which the various numbers, arias, duets, choruses and recitative passages are linked without any apparent interruptions. There are those who see in this new operatic structure particularly longsighted anticipations of choices that would be made by the young Wagner, whose debt to Weber seems particularly clear on an attentive listening to Euryanthe. Robert Schumann was a convinced admirer of this opera set to music wholly from start to finish, on the model of Italian opera, but deeply German in its language and contents. As ever, when he was speaking of German music, Schumann was expressing a judgement that we might today define as absolutely perfect and in which we concur with every word.