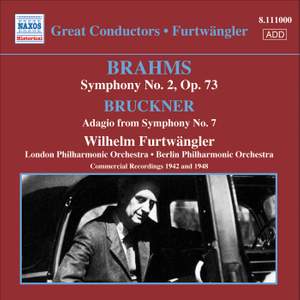 If the most notable trait of this 1948 recording of Brahms’ Second Symphony, Furtwängler’s only commercial recording of the work, is the extreme variance of tempo, the composer’s characteristically restless contrast of dynamism and lyricism is nevertheless placed firmly within a framework of the clearest realisation of form and symphonic development. The orchestra is audibly galvanised by Furtwängler’s interpretative flexibility, which courses at white heat throughout the work.

Another considerable asset is the recording quality achieved by the engineers in one of the most sought-after venues for orchestral music in England, Kingsway Hall in London.