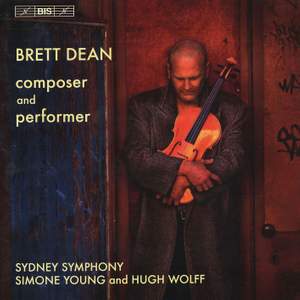 The concerto has plenty of good ideas – a brief, meditative introduction, a vivid hunt of soloist by orchestra, and finally a dank reverie, the elegiac quality of which is suffused with quasi-expressionist... — Financial Times More…

As a viola-playing composer Brett Dean is in the elevated company of Bach, Mozart, Schubert, Dvorák, Hindemith and Vaughan Williams. But even if this disc includes two works focusing on Dean’s own instrument – in performances by the composer himself – his impressive work list consists of a wide spectrum of genres, including concertos, orchestral works, chamber music and vocal works. A number of these have been written for the Berlin Philharmonic Orchestra, of which Dean was a member for 14 years, or for ensembles belonging to it. One such work is the song cycle Winter Songs, released on BIS-CD-1332 in a performance by Daniel Norman, tenor, and the Berlin Philharmonic Wind Quintet.

On the present disc, two other ‘Berlin pieces’ are included. Twelve Angry Men, written for the cellists of the orchestra, was inspired by the famous courtroom film with the same name and charts the course of the jury’s heated deliberations. Komarov’s Fall, for full orchestra, was commissioned by Sir Simon Rattle and the Berlin Philharmonic as a companion piece for Holst’s The Planets, and was written in memory of the Soviet cosmonaut Vladimir Komarov, the first person to die in space (in 1967).

The concerto has plenty of good ideas – a brief, meditative introduction, a vivid hunt of soloist by orchestra, and finally a dank reverie, the elegiac quality of which is suffused with quasi-expressionist angst. Curiously beautiful, somewhat enigmatic? No question.

the two works included here that feature [Dean's] playing show him to be a formidable and musical player as well as an impressive composer...[The Viola Concerto] is one of Dean's most successful orchestral works...Intimate Decisions, from 1996, is a wonderfully virtuosic solo piece that only someone with a deep knowledge of the viola could have composed.