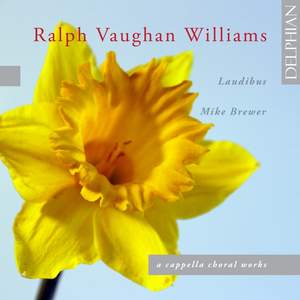 Vaughan Williams: The Souls of the Righteous

No. 2, The Cloud-Capp'd Towers

Vaughan Williams: Prayer to the Father of Heaven

Vaughan Williams: Love is a Sickness

Brewer and his award-winning chamber choir Laudibus have unearthed some rare and precious gems in this recording of a cappella choral music by one of England’s best-loved composers. Little-known works both early and late nestle alongside repertory staples such as the glorious Mass in G minor, in a programme which displays Vaughan Williams’ indebtedness to both the sacred and secular instincts of his Elizabethan precursors.

Vaughan Williams… musical personality shines out all through this selection of sacred and secular a cappella music… Mike Brewer's excellent chamber choir Laudibus sings with beautifully blended tone, and good stand-out solo work… the disc offers must to discover and must to enjoy, and its altogether a treasurable contribution to the Vaughan Williams anniversary celebrations.

The finely blended voices of Mike Brewer’s Laudibus, an offshoot of the National Youth Choir of Great Britain, provide much pleasure in this inventive selection of a cappella Vaughan Williams. Little-heard late motets mix with early strivings and that radiant response to Tudor polyphony, the Mass in G minor. But as the disc advances, a doubt arises. Mass or folk song, everything is sung with the same rapt reverence. Let’s also have a little iron in the fire.