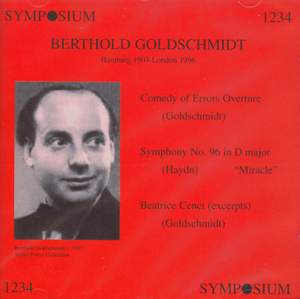 Goldschmidt, B: Comedy of Errors: Overture

Act I: Prelude - Lucrezia and Beatrice lament their fate - Bernardo tells of his father's treatment of him

Act I: Banquet Scene - Lucrezia expresses her devotion to her father

After studying with Franz Schreker, Goldschmidt was set to become one of the most significant of 20th-century German composers. However, in 1933 he was sacked and in 1935, fortunate enough to be interviewed by a Gestapo officer whose daughter was studying piano, he was allowed to leave for England. However, here he was a misfit in the musical scene, earning a living by teaching and some conducting. Only at the very end of his life did he begin to achieve recognition. These recordings, from his own collection, allow us to judge his ability as a conductor of a classical work and, though several hearings may be needed, his stature as a composer.