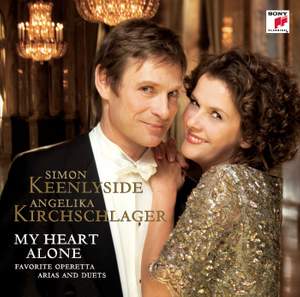 What impresses is not only the natural brilliance of the singers' vocal production but also the way in which pure display is subordinated to expression of true feeling. — Gramophone Magazine, September 2008 More…

My Heart Alone is the new recording from Austrian mezzo-soprano Angelika Kirchschlager and British baritone Simon Keenlyside, and proves that Operetta is still alive. Both singers are highly respected in the fields of opera and Lieder recital, and have appeared several times as a partnership, notably in the title roles in Pelléas et Mélisande at the Salzburg Easter Festival and at Covent Garden, where they have been feted as the dream couple of the opera world.

This is the duo’s first Operetta recording, following in the great tradition of famous opera singers like Elisabeth Schwarzkopf, Fritz Wunderlich and Hermann Prey, whose careers blossomed beyond the opera stage. The choice of repertoire for this programme ranges widely from the golden age to the silver age, and includes gems from Die Fledermaus and Die Tänzerin Fanny Elssler by the father of Viennese operetta and waltz king Johann Strauss, as well as titles from popular works such as Franz von Suppé's masterwork Boccaccio and Franz Léhar's Merry Widow. The duet Nur die Liebe macht uns jung from Franz Léhar's Zigeunerliebe however, is an absolute rarity.

What impresses is not only the natural brilliance of the singers' vocal production but also the way in which pure display is subordinated to expression of true feeling.

Kirchschlager tries too hard as the dissolute Orlofsky ( Die Fledermaus ) but makes amends with a tenderly phrased "Vilja" and a sinuous, seductive "Meine Lippen, die küssen so heiss" from Lehár's Giuditta. Simon Keenlyside, in glorious voice, is by turns dulcet and virile, even if he doesn't quite muster the insouciant charm of a Nicolai Gedda for Danilo's "Da geh' ich zu Maxim". Drawbacks include some distinctly schmaltzy accompaniments and a booklet long on pretentious waffle but criminally short on texts and translations.

Keenlyside sings operetta like a student, learning the ropes, too quick to pitch volume and intensity at a level fit for Verdi, but not the sweetmeats of Vienna...Best to concentrate on Kirchschlager, who is frequently marvellous. As an Austrian, the operetta lilt lives in Kirchschlager’s blood; she’s a natural at pausing and easing the speeds, and she sings with that indefinable glow.