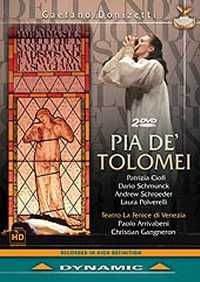 In recent years not only music festivals but also important opera theatres have turned their attention towards the neglected masterpieces of the lyrical repertoire. Thus also Venice’s Teatro La Fenice, in a commendable effort, staged this Pia de’ Tolomei by Donizetti, with some of the best singers available today for this type of repertoire. Initial response to this opera, which was performed for the first time in 1837, was ambiguous, so much so that Donizetti re-worked it as many as three times. The version here recorded is that of the critical edition recently published by Ricordi, with the tragic finale originally conceived by the composer. The listener will undoubtedly wonder, once more, at Donizetti’s wealth of melodic inspiration, especially when it comes to the character of Pia, wonderfully interpreted, here, by Patrizia Ciofi.