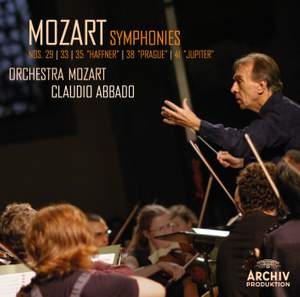 This is some of the best Mozart conducting you will ever hear. These performances are above all triumphs of experience, innate musicality and understanding, meticulous yet clear thinking, and…... — Gramophone Magazine, Awards Issue 2008 More…

ABBADO 2008 is a celebration of Claudio Abbado's 75th birthday in June, and a cornucopia of six releases is planned to mark the occasion. These include two new Mozart recordings; a new version of his landmark Beethoven symphony cycle plus a new collection of Beethoven concertos; a DVD of Abbado in Concert; as well as a new CD compilation, for which Abbado himself made the selections. Two Times Mozart – Symphonies and Violin Concertos. The two new recordings are both Mozart themed. They feature the Orchestra Mozart, a handpicked group of players founded in Bologna in 2004, with Abbado as their artistic director – and with Giuliano Carmignola as concert-master. Both recordings bear witness to Abbado’s continuing love of Mozart. Abbado has prepared the orchestra by touring throughout Italy – gathering acclaim for their performances, not only for their Mozart, but also Bach (Brandenburg Concertos) and other composers. The energy and freshness found in the performances of the Violin Concertos is also evident in the recordings of five Mozart symphonies, including the "Haffner", the "Prague" and the "Jupiter". Consider these as Abbado’s “home recordings” of the five symphonies – recorded live from concerts in Bologna, Bolzano, Modena and Ferrara between 2004 and 2006 – giving them an extraordinary, raw energy, with the impact of drama and lyricism at the forefront. The recordings of Symphonies nos. 33 and 38 (Prague) are new to Abbado’s discography.

This is some of the best Mozart conducting you will ever hear. These performances are above all triumphs of experience, innate musicality and understanding, meticulous yet clear thinking, and… the art of listening.

Mozart emerges here as a vital elixir: using the period-instrument orchestra he founded to perform music of the classical era, Abbado brings a time-honoured Mozartian tradition, learnt from the pianists Friedrich Gulda and Rudolf Serkin, to bear on these much-recorded works. The prestos of the Haffner and “Prague” positively tingle with excitement; the great finale of the Jupiter reveals Mozart’s complex counterpoint with unerring clarity. Textures are bright and clear, the balance between wind and strings is ideal and the sublime melodies of the slow movements are “sung” with an Italianate cantilena Mozart would surely have revelled in. A classic set.

Throughout these symphonies, recorded "live" with his young, hand-picked orchestra, articulation is crisp and pointed, vibrato abstemiously applied. Mozart's intricate contrapuntal textures in the first movement of the Prague and the finale of the Jupiter have rarely sounded so lucid. There is no denying the finesse of Abbado's phrasing and his care for inner detail. The flowing tempos for the andantes are ideally chosen. Too often, though, I hear coolness, a touch of over-calculation, in Abbado's conducting. Some of the detached, period-style bowing can sound finicky. The outer movements of the Jupiter and the stupendous first movement of the Prague have nothing like the incandescence of Charles Mackerras's recent Scottish Chamber Orchestra recordings (Linn).

The booklet quotes Abbado saying, “The study of phrasing in Mozart is endless.” Yes indeed, and the fruits are borne out in the conductor's live performances of five selected symphonies with his bouncy, young Orchestra Mozart. The Haffner first movement is especially thrilling and the pianissimos in No 29 would charm a mouse. Effects in No 33 seem more heavy-handed, but the set’s major drawback is the sound: constricted in tuttis, lacking air.