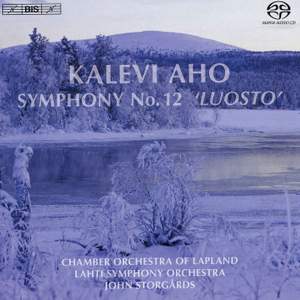 Like Vaughan Williams's Seventh, Aho's Twelfth is a work of immediate effect yet needs time to make its full impact. — Gramophone Magazine, October 2008

BIS releases the first recording on CD of Kalevi Aho’s Symphony No.12 - ‘Luosto’. It was written for a performance on the slopes of Mount Luosto in Finnish Lapland. It makes use of two orchestras, two vocal soloists and a number of brass players and percussionists placed at various distances from each other and the conductor, surrounding the audience. The primary inspiration for this four-movement work came from the natural surroundings and traditions of Lapland, and parts of it were composed during a bitterly cold spell in the solitude of a cottage at the foot of Orresokka, the mountain next to Luosto. The three-dimensional qualities written into the score makes it the perfect subject for a Surround Sound recording and during the recording sessions in the acclaimed acoustics of the Lahti Sibelius Hall, great pains were taken to recreate the set-up of the first performance. This took place in 2003, in front of – or rather around – an audience of over 2000 people, and became the starting point of ‘LuostoClassic’, an annual summer music festival which in 2008 features another performance of Aho’s symphony.

Like Vaughan Williams's Seventh, Aho's Twelfth is a work of immediate effect yet needs time to make its full impact.