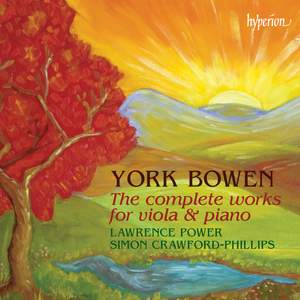 Bowen: Romance in A major

This recent appraisal of Lawrence Power affirms his status as one of the foremost violists of today, the heir to the long and honoured tradition of Lionel Tertis and William Primrose. His unwavering musical eloquence and brilliant

technical ability have consistently drawn the highest praise for all his recordings and performances. His renditions of viola concertos by Walton, Rubbra, Cecil Forsyth and York Bowen have been acclaimed as benchmark recordings. He now presents a fascinating double-album of York Bowen’s viola music: a selection that fully demonstrates the great artistry of the composer known as the ‘English Rachmaninov’.

Bowen first came under the spell of the viola player Lionel Tertis when a student at the Royal Academy of Music. He responded to Tertis’s unprecedented virtuosity and large tone with two sonatas, a concerto and many shorter pieces. He continued to write works for Tertis throughout his life, all of which are recorded here, and they display the sort of extraordinary technical challenges which prove what an amazing virtuoso he was.

Power, the first British winner of the William Primrose International Viola Competition, now returns to this cherishable area of the repertoire with equally stunning results. Accompanied by Crawford-Phillips, Lawrence’s fabulous combination of tonal
seductiveness and technical wizardry works wonders in the bold expressive outlines of the two sonatas. Yet it is the heart-warming, stand-alone pieces (many recorded here for the first time) … that make this release truly indispensable. Another Hyperion winner

Inspired by the incomparable Lionel Tertis, his friend and colleague at the Royal Academy of Music, Bowen wrote music for the viola of such richness and fantasy that its long neglect is one of music's saddest mysteries. True, Bowen's delight in resurrecting the glamour of the past and archaisms too long uncherished, sat uneasily with the engulfing modernism of his age.
Bowen, like Medtner, had little wish to move with the times, and yet if his music is endearingly old-fashioned it is also full of surprises and of a harmonic language and idiom peculiarly his own. Only a puritan could fail to respond to Bowen's warmth and exquisite craftsmanship in, for example the Fantasia, two Romances and the two Melodies where his sense of elegy takes on a double meaning: the aftermath of the war and the loss of what he saw as the departure of civilised creativity.
Both discs are beautifully planned, opening with sizeable sonatas and continuing with shorter works before ending with more largescale offerings, and the performances could hardly be more glowing. Bowen's writing for both instruments is more than demanding yet nothing detracts from Lawrence Power's and Simon Crawford-Phillips's enviable fluency and achievement. Once again Hyperion has hit the jackpot in a much-needed revival and the sound and balance are exemplary.

…the performances could hardly more glowing. Bowen's writing for both instruments is more than demanding yet nothing detracts from Lawrence Power's and Simon Crawford-Phillips's enviable fluency and achievement.

It is easy to dismiss Bowen’s music as conservative, but the two viola sonatas of 1905 and 1906 are clearly inspired by the romantic style of Brahms’s late sonatas for clarinet or viola. They are worthy successors, at least when played with the sumptuous tone, passionate conviction and supreme technical address that Powers lavishes on them here. Crawford-Phillips relishes the bravura of York’s writing for the piano (the composer’s first instrument) in this superbly executed set, unlikely to be equalled very soon.

All the pieces show Bowen's love of the instrument's capacity to unfold long-limbed, rhapsodic melodies, though his harmonic world rarely strays beyond that of Brahms; Lawrence Power's richly expressive moulding of them is a rare treat in itself.