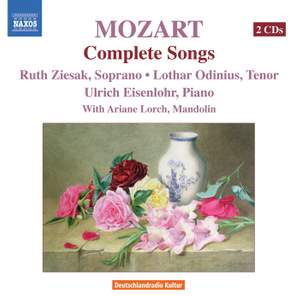 Mozart loved the human voice, which he used as an instrument of musical expression throughout his compositional career from the age of six or seven. His Lieder, written largely in response to requests and commissions from acquaintances, friends and publishers deal with everyday subjects such as friendship and romance but also with social and political occasions such as the Emperor Joseph II’s Turkish campaign. Some were written in connection with Mozart’s activities as a freemason. Only one, the bitter-sweet Das Veilchen (The Violet) is set to the words of a major poet, Goethe. The many miniature masterpieces to be heard on this recording include Komm, liebe Zither, komm (Come, dear Zither), a musical precursor, with mandolin accompaniment, of Don Giovanni’s serenade Deh vieni alla finestra, the idyllic Der Zauberer (The Sorcerer) and the dramatically graphic Als Luise die Briefe ihres ungetreuen Liebhabers verbrannte (When Louisa burned the letters of her unfaithful lover).