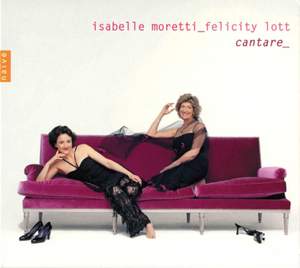 …a disc crammed full of various delights, with the harp singing alone in nearly half of the pieces, and acting as radiant accompanist to Felicity Lott in the remainder. …Debussy's 'La Belle... — BBC Music Magazine, January 2010, 4 out of 5 stars More…

Balakirev: Glinka - A Farewell to St Petersburg: No. 10. Zhavoronok (The Lark) (arr. I. Moretti for harp)

A sa guitare (version for voice and harp)

Arlen: The Wizard of Oz: Over the Rainbow (arr. I. Moretti)

One of Britain’s most acclaimed and best-loved sopranos, Felicity Lott, collaborates with award-winning harpist, Isabelle Moretti, to create ‘Cantare’ – a celebration of the relationship between the harp and the voice ranging over a very varied and sometimes surprising repertoire. Dame Felicity Lott, a long time friend of Isabelle, brings her experience, charm and charisma to the vocal works chosen by both herself and the harpist. First sung by Judy Garland in the musical film The Wizard of Oz (1939), “Over the Rainbow” has become a universally known tune. Isabelle Moretti calls it her ‘cult song’, and Felicity Lott admits to humming it in the shower. Here, the harp part is an arrangement by the harpist herself. Award-winning artist Isabelle Moretti is one of the most appealing figures in the world of the harp and on today’s musical scene. Her rich and varied discography has been much acclaimed, winning such awards as the Victoire de la Musique, Grand Prix de la Nouvelle Académie du Disque, Prix Charles Cros, Choc du Monde de la Musique, 10 de Répertoire, and fff de Télérama.

…a disc crammed full of various delights, with the harp singing alone in nearly half of the pieces, and acting as radiant accompanist to Felicity Lott in the remainder. …Debussy's 'La Belle au bois dormant' is a magical revelation. Lott is, of course, an ideal accomplice, whether dreamily sophisticated as here or more innocent, as in Martini's 'Plaisir d'amour'. ...Moretti's musicality shines through.

...the harp is exhibited as an instrument of many colours, and of virile strength as well as blushful modesty. Wonders are performed as melodies sing forth in clear-voiced solo or a melisma is woven in the air...Felicity Lott's own singing is as delightful as ever, and the varied selection is well made.