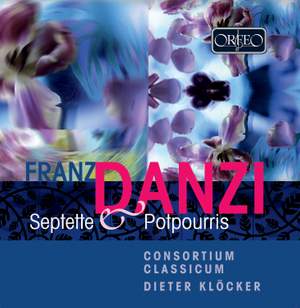 Danzi: Potpourri No. 3 in B-Flat Major

Franz Danzi exerted a profound influence on the German musical scene at the end of the 18th and beginning of the 19th century.A product of the Mannheim School, he was extensively involved in orchestral advances in Munich, Stuttgart and Karlsruhe. In particular the two Clarinet Potpourris featured on the present CD are performed by Dieter Klöcker and his colleagues with a virtuoso delight in the composer's melodic vein, which ranges from songlike simplicity to elaborate examples of variation form. Danzi reveals himself as a true master in his two Septets which explore a wide expressive range between strings and winds and between dance-like rhythms and lively hunting fanfares. In recording these works the Consortium Classicum render outstanding service to a composer whose works are unjustly neglected but deserve to be far better known.