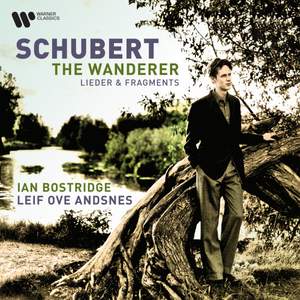 An attractive compilation from EMI's 2001-02 series of Schubert Lieder and piano music. Here, it's predominantly Lieder, with just three piano fragments; but with both artists at their relaxed... — BBC Music Magazine, December 2008, 4 out of 5 stars More…

Two musical titans in the classical world, British tenor Ian Bostridge and Norwegian pianist Leif Ove Andsnes, both major EMI Classics artists, are brought together once again in a 2CD compilation celebrating their great contribution and commitment to Schubert for the label. As well as featuring specially selected lieder and piano fragments from their critically acclaimed Bostridge / Andsnes Schubert Sonata and Lieder series, the album also includes five newly recorded lieder never previously released by Bostridge. Their partnership was described by The Times as "one of the most inspired of record-company matchmakings: the two musicians really do test and try each other at every turn, as well as being mutually supportive…” Firmly established in the opera house, concert hall and recital room, and much sought after internationally as one of the finest of his generation of tenors, Ian Bostridge is today one of the leading Schubert lieder interpreters, repertoire that he openly states as his first love. Ian’s passion for lieder dates back to early studies at his school in England. Ian explains: ‘I had a wonderful German teacher at my school who got me into German lieder and that has been the thing that has really made me a musician – the lieder.’

An attractive compilation from EMI's 2001-02 series of Schubert Lieder and piano music. Here, it's predominantly Lieder, with just three piano fragments; but with both artists at their relaxed and creatively focused best.

...from Bostridge you have intelligent word painting, effortless sense of line, langorous phrasing, and a vocal quality that is as sonorous in the upper register as it is mellow in the lower. Andsnes more than accompanies, he pushes the beauty and depth of the piano writing to the fore, whilst never unbecomingly stealing the show.