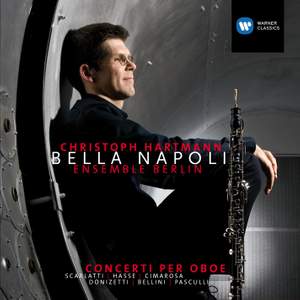 This disc is as beautifully played as you are entitled to expect from a soloist and ensemble drawn from the Berlin Philharmonic. Uncomplicated music delivered with high-level skill; this is... — Gramophone Magazine, Awards Issue 2008 More…

Scarlatti, Hasse, Cimarosa, Bellini, Donizetti und Pasculli - six composers from three different centuries, all inspired by the city of Naples. After the successful German release of his debut CD recital Fantasia Italiana which focussed on the so-called ‘Paganini of the Oboe’, Antonio Pasculli, oboist Christoph Hartmann embarked on another trip to Italy. There he unearthed some true gems for his instrument amongst the works of the great opera composers and piano masters: music full of virtuosity, drama and enchanting cantabile!

This new CD features the well known Bellini concerto, together with five world premiere recordings – Hartmann compiled the Scarlatti and Cimarosa concertos from sonatas of these early keyboard masters, together with the arranger Wolfgang Renz. The Hasse concerto is an original work altogether, whilst the works by Donizetti and Pasculli are originally set for oboe and piano but have been newly orchestrated by Wolfgang Renz.

This disc is as beautifully played as you are entitled to expect from a soloist and ensemble drawn from the Berlin Philharmonic. Uncomplicated music delivered with high-level skill; this is a disc for simple enjoyment.