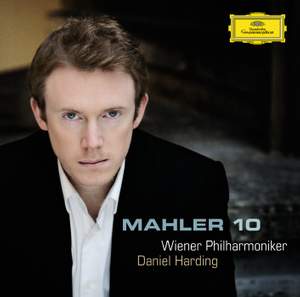 Throughout, the orchestral sound is striking, lighter in the bass than usual, with glorious horn-playing and burnished unanimity from frequently high-lying strings. — Gramophone Magazine, July 2008 More…

Mahler’s Symphony No. 10 existed only in sketch form (the opening Adagio aside) at the time of the composer’s death in 1911. It was “completed” decades later by the English scholar Deryck Cooke in collaboration with Berthold Goldschmidt, Colin Matthews and David Matthews. The performing edition attempts to give an idea of Mahler’s conception of the symphony.

Cooke himself wrote various versions in order to reconstruct the piece. Harding has chosen a version that was published in 1989 after Cooke’s death (slightly revised Deryck Cooke version from 1976).

On 17 December 2004, 29-year-old Daniel Harding made his debut with the Wiener Philharmoniker; a memorable moment in any conductor’s career, but especially for one so young. On the programme was Mahler’s Symphony no. 10. Harding has since performed this symphony, which Mahler himself never lived to conduct, with other orchestras including the London Symphony Orchestra (of which he is Principal Guest Conductor) and his Swedish Radio Symphony Orchestra. However for this recording he returned to Mahler’s own orchestra (1889–1901), to the heritage and excellence of the Wiener Philharmoniker

Throughout, the orchestral sound is striking, lighter in the bass than usual, with glorious horn-playing and burnished unanimity from frequently high-lying strings.

This reading of the 1989 revision of Deryck Cooke’s performing version is an impressive journey. By the finale, with its dramatic bass-drum death stroke and that exquisitely beautiful flute melody, we have been sucked into the vortex of the music’s swirling psychological complexities, able to see not only Mahler’s tragedies, fears and emotional vicissitudes, but also our own.

[This] is a powerfully wrought reading, which seems to gain in authority and conviction as it goes on - Harding's account of the finale is particularly impressive, so that it now seems one of the greatest, and bleakest, of all Mahler's symphonic movements. The opening Adagio, though, never quite generates the intensity one knows that it should, so that the agenda for all that follows is not made as distinct as it might be. Even the characterful playing of the Vienna Philharmonic, especially in the central three movements with their ghosts and distortions of the popular musics that haunt all of Mahler's output, can't quite compensate for that, so, for all its strengths, Harding's performance doesn't quite measure up to either Rattle's with the Berlin Philharmonic or Chailly's with the Berlin Radio.

Harding made his Philharmonic debut with this symphony in 2004, and you feel the team’s mutual comfort the moment those questing viola phrases launch the epic adagio. He’s wise enough not to stop the Viennese musicians from sounding Viennese. Their natural lilt brings major dividends in the fourth movement, where the waltz rhythms spin us into a neurotic nightmare. After this turn round the haunted ballroom, another high point arrives with the finale’s flute solo, so tender and sad, underpinned in the orchestra by another exquisite Viennese touch – phrases hugged as though no one wants to let them go.