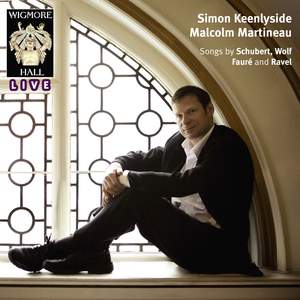 The opening Schubert group demonstrates the baritone's natural and unaffected delivery - an ability to hold words and notes together in one single gesture - and his finely tuned vocalism, founded... — BBC Music Magazine, December 2009 More…

He was already noted as a recitalist, and “a talent to cherish” as far back as 1989. Since appearing in La Scala in 1998 he has performed recitals all over the world, his repertoire including: Schubert, Schumann, Strauss, Brahms, Fauré, Wolf and Mahler. He has also recorded many English songs. Gramophone describe him as the finest baritone singer of Lieder this country has ever produced.

In Simon's own words “I've probably got around 15 years, and think I can see the end of the tunnel. I've done most of the roles that suit me and some, like Papageno, I'll never want to drop…” “In Wagner I shan't go beyond Wolfram in Tannhauser. I know there's Beckmesser, but I'm afraid it's not a role that excites or fascinates me. I'll never get tired of the stand-and-sing roles like Germont in Traviata and Posa in Don Carlos - parts where you really have to act with your voice and pin the audience to their seats with inflexion, nuance and colour. I probably shan't sing Billy Budd again… and am moving down from Pelleas to Golaud. The two new roles I'm most excited about are Wozzeck and Rigoletto, which are both great theatre and call on a huge palette of colours. Wozzeck in particular, is a mountain any baritone wants to climb…”

The opening Schubert group demonstrates the baritone's natural and unaffected delivery - an ability to hold words and notes together in one single gesture - and his finely tuned vocalism, founded on a lightly rounded but always expressive tone. He sounds equally at ease in the French half of the programme. ...'En sourdine' flows beautifully...and the light humour of 'Le Papillon et la Fleur', Fauré's Op. 1 No. 1, is flawlessly conveyed in Martineau's enchantingly lithe pianism.

you’re being invited to step into a more gently nuanced and delicately observed world, where the expressive weight of each phrase is being judged to perfection, with not a gram of emotional excess...this is such a successful document of the occasion that you might honestly end up feeling that you were [there]… and can be again, and again.