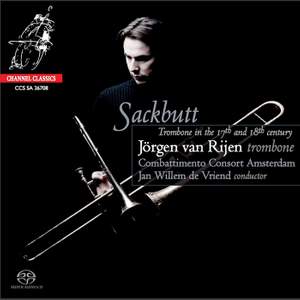 Bertali: Sonata à 3 No. 2 for 2 violins, trombone and basso continuo

Wagenseil: Concerto for Trombone and Orchestra

Bertali: Sonata à 3 No. 2 for 2 violins, trombone and basso continuo

“We have recorded works by violinist-composers Biagio Marini, Antonio Bertali, and Johann Heinrich Schmelzer. Dario Castello is the exception: he was a brass player. Why did those composers pick the trombone, of all instruments, for this purpose, rather than, say, the horn? One of the reasons was that the trombone was the only brass instrument of that period which was capable of playing a complete chromatic scale. In other words, the trombone could execute melodies and runs in the same way as a violin. Around 1800, the newly-invented valves were added to trombones, horns, and trumpets. That made the chromatic scale possible for hornists and trumpeters as well, and it resulted in a kind of terrain shift. Later on, the trombone’s role within classical music was primarily within the symphonic orchestra, where it was used for color and reinforcement. But in music of the baroque period for small ensembles, the trombone was making music together with the strings, as a soloist.” (from liner notes by Katja Reichenfeld)