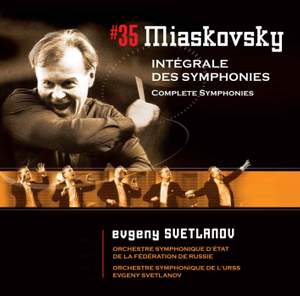 …if Myaskovsky ultimately remains a flawed genius, there is little doubt that his symphonic journey offers far more peaks than troughs. …the conductor's passionate commitment to the music carries... — BBC Music Magazine, August 2008, 4 out of 5 stars More…

Miaskovsky: Symphony No.13 in B flat minor Op.36 : Andante moderato

Miaskovsky: Sinfonietta in A major Op.10

Recording of the Week,  Time to re-evaluate Miaskovsky

A 16-CD of the Russian composer’s complete symphonies and orchestral works gives Chris a chance to explore the remarkable legacy of the ‘father of the Soviet symphony’.

After the collapse of the Soviet Union, Svetlanov undertook the formidable project of recording the complete Miaskovsky orchestral music with the orchestra he had led for nearly three decades, the Russian Federation Academic Symphony Orchestra (previously known as the USSR State Symphony Orchestra). The recordings were made in the early 1990s in a partnership between Svetlanov and the UK's Olympia Records, and the first ten volumes were issued to critical acclaim. However, Olympia went out of business soon after that and collectors have been waiting for the remainder since. Last year budget label Alto bought up the rights to the remaining few and have now got up to volume 13 but it is still not yet complete and the first 10 volumes are currently unavailable.

This box set then represents a hugely important release. It is the only complete set of the symphonies available and will almost inevitably cause a major re-evaluation of Miaskovsky's work. And at a such a great price it is not to be missed!

…if Myaskovsky ultimately remains a flawed genius, there is little doubt that his symphonic journey offers far more peaks than troughs. …the conductor's passionate commitment to the music carries one through those few moments where the ensemble may be less than ideal.

Though presumably similarly sourced, the transfers on these two issues are not always identical in matters of balance and equalisation. The main drawback of the Warner set is the skimpiness of its annotations.
Alto remains committed to giving us the contextual material such unfamiliar scores can scarcely do without. Its makeweight here is a case in point. A seemingly innocuous overture, it turns out to have been the composer's contribution to Stalin's 60th birthday celebrations in 1939. In which case its avoidance of vulgarity may even be considered quietly heroic.
Of the two symphonies in the Alto instalment, the 17th (1936-37) is indubitably a large statement.
Composed at the height of the Great Terror, its idiom seems a little more extroverted than usual, Rachmaninov crossed with Khachaturian perhaps. The epic slow movement will be a must for listeners with a sweet tooth even if things could, with advantage, move on a little faster! Liadov meets Korngold in the Trio of the third. You may well have come across this performance in an earlier Melodiya incarnation.
The 21st (1940) was long Myaskovsky's calling- card. It was commissioned by the Chicago SO and there are vintage recordings originating from both sides of the Iron Curtain.
None is as long-breathed as this one. Perhaps one can forgive the blaring confusion of Svetlanov's climaxes for the nobility of his take on the elevated, Roy Harris-style opening section. The score's most memorable idea, referencing Rimsky's Antar Symphony, has that authentic Myaskovsky lyricism in spades and of course Svetlanov milks it for all it's worth. Glorious heartfelt stuff although those brought up on more tautly controlled readings may cry self-indulgence. As usual the playing ranges from the inspired to the sketchy, the results compellingly 'noble' even where manifestly flawed.
For anyone coming fresh to the composer and his world, the Warner set provides an extraordinarily economical, if potentially mystifying, entrée.

Svetlanov believes in this music ardently and his sympathy shines through every bar...This is a treasure house that will reward the exploratory listener, dedicated performances, music of great humanity and integrity.