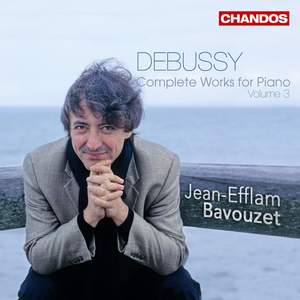 III. Serenade for a Doll

Jean-Efflam Bavouzet here offers the third volume in his series devoted to the complete works for piano by Debussy. The music now moves to a more playful strand in Debussy’s compositional career, with generally shorter pieces of the salon genre, including the two famous collections Children’s Corner and Suite bergamasque.

In addition to these well-known works are several that are more rarely heard. Two such are La plus que lente, which seems to look ahead to the Études of 1915, and Élégie. Roger Nichols describes the former as ‘one of his most delightful pieces… the harmonic turns are particularly sophisticated and enchanting’. The Élégie was written in 1915 following the composer’s move to the coast. The outbreak of the First World War had initially depressed Debussy into a state of creative sterility but the move was to prove most productive. The Élégie was written for a charity and, dedicated to Queen Alexandra, honours the role of women in wartime. It is now rarely performed but Roger Nichols writes, ‘it is one of the composer’s most extraordinary works… and we are left wondering what on earth Debussy would have written in the 1920s and beyond’.

Bavouzet’s previous two volumes have been very well received both critically and commercially. In a recent review of volume two the LA Times wrote, ‘In what may turn out to be the greatest complete recorded survey of the composer’s piano music yet, Jean-Efflam Bavouzet… plays with such bracing clarity that hearing the early Romantic pieces, one feels like jumping into an icy pond after an hour in the sauna’. Of the same volume International Record Review has noted, ‘I had the highest praise for Jean-Efflam Bavouzet’s first volume of Debussy, and the present disc is fully the equal of that one in terms of colour, refinement of touch, spontaneity and technical finish… Bavouzet has written that his Debussy playing has been influenced by that of Gieseking, Michelangeli and Richter. You may hear something of each of these pianists in his playing but more than that you will hear his own distinctive and special voice’.

This series is a deeply personal project for Bavouzet who has been involved in all aspects of the recording process.

Volume 3 of Jean-Efflam Bavouzet's superb Debussy cycle links mostly early miniatures with the Suite bergamasque and Children's Corner.
Once more he turns conventional notions of 'impressionism' topsy-turvy, cleansing Debussy of years of dust and accretion and recreating him in every bar in a sparkling and pristine light.
Fiercely energised yet superfine, his performances are not for those with comfortable drawing- room notions of Debussy, and rarely in my experience has a pianist so faultlessly or precisely achieved his aims.
All sentimentality is erased from the Nocturne's enchanting evanescence and just when he momentarily has you wishing that his formidable directness would melt into something more heart-easing, he makes you gasp at his flawless balance of sense and sensibility. He makes something audaciously epic out of Hommage à Haydn and the startling hesitancy in the opening of 'The Snow is Dancing' is convincing rather than idiosyncratic.
His recital ends on a desolating note with the Berceuse héroïque's phantom battle-cries and bugle-calls memorably evoked. The superbly recorded disc includes his own remarkable essay.
This could well be the finest and most challenging of all Debussy piano cycles.
A greater study in contrast in 'composer and interpreter' would be hard to imagine then between Bavouzet and Pascal Rogéacute;. Where Bavouzet breaks out into blazing Mediterranean sunlight, Rogéacute; (radically enriching his earlier Decca Debussy discs) is happy to withdraw into shadow-land. Time and again his playing suggests emotion recollected in tranquillity rather than turmoil; and in, say, 'Hommage à Rameau' or the Sarabande from Pour le piano he discovers the mysterious, still centre of Debussy's art.
'Poissons d'or' is a marvellous distillation of indolence and flashing disruption, and 'Mouvement' is a perky and vivacious rejoinder to all former introspection. And so too is the Toccata, played with unerring ease and grace, and with many ear-catching details.
To summarise, the ever-elusive truth lies somewhere between Rogéacute; the dreamer, Bavouzet the sinewy but always musical athlete, Thibaudet, the teasing wit and sophisticate and, of course, the legendary Gieseking. You pays your money and you takes your choice…

Fiercely energised yet superfine, his performances are not for those with comfortable drawing-room notions of Debussy.

Debussy playing does not come any better than this

This third volume confirms Jean-Efflam Bavouzet's winning affinity for Debussy's music. Such familiar pieces as the Suite bergamasque, Deux Arabesques or Children's Corner come across with their colours luminous, their ideas voiced fluently and the moods atmospherically fixed.