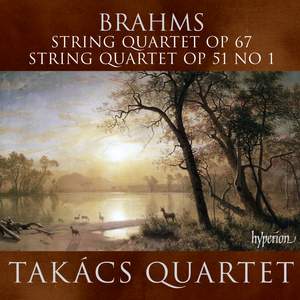 Their approach is alert, texturally clear and passionate … these are admriable performances which I recommend to any prospective buyer … this new Takács reading weighs in at the top end of the... — BBC Music Magazine More…

New recordings by the Takács Quartet on Hyperion have become important landmarks in the musical calendar. This second disc of Brahms string quartets looks set to repeat all the commercial and critical success of their first.

It took twenty years for the famously self-critical Brahms to release his Op 51 string quartets for publication. Despite frequent requests, they were held back until they had reached his requisite standard of perfection. It is clear that Brahms’s struggle with the string quartet medium eventually led him to find an intensely personal language for it, with an unmistakable originality of melody and texture. Op 51 No 1 is both suffused with great musical richness and organically unified, with each idea growing with unerring logic out of the last in a process of continual development, and the main subject of each movement clearly arising out of the same germ.

Having hesitated so long over his first two string quartets, Brahms managed to produce their successor, Op 67, without any protracted birth-pangs, and the fact that the new work was dedicated to a well-known physician prompted him to elaborate on the medical analogy. ‘I am’, he told Theodor Wilhelm Engelmann (the husband of the pianist Emma Brandes, and himself a keen amateur cellist) ‘publishing a string quartet, and may need a doctor for it (as with the first ones). This quartet rather resembles your wife—very dainty, but brilliant! … It’s no longer a question of a forceps delivery; but of simply standing by. There’s no cello solo in it, but such a tender viola solo that you may want to change your instrument for its sake!’

Their approach is alert, texturally clear and passionate … these are admriable performances which I recommend to any prospective buyer … this new Takács reading weighs in at the top end of the many available versions

Viola to the fore in the third movement, Agitato, of No 3; and Geraldine Walther, firm-toned and assertive, rises to the occasion as the only un-muted instrumentalist here. Agitation isn't consistently maintained though because the Takács Quartet tend to ease the tension in places. Yet there is no slack in the other movements.
This close-knit group unanimously stretch or tighten the rhythm, achieving evenly matched dynamics such as the sotto voce sequences in the opening Vivace, the hushed dolce e grazioso in the recapitulation of the Andante and the stilled peace of the G flat sixth variation in the finale. Walther is well in the picture in this movement too whereas elsewhere she appears occasionally to lose focus.
Not so in No 1. Her place on the right of the ensemble is firmly assured here. The work is 'commonly held to be representative of Brahms's austerity and asceticism' (Edwin Evans), and these epithets are apposite for the Takács, spare of style and tone. The players' control over the first movement doesn't preclude a range of rubato that serves to sharpen the musical argument.
Nor does it preclude a linear drive that knits the six themes of the last movement into a coherent whole, while they do not let up on the melancholy of the middle movements, the third particularly dark. The recording is tonally credible but is widely separated.

The Takács chart the music’s undulating emotions with a compelling assuredness … playing of radiant warmth and phrasal sensitivity. Andrew Keener and Simon Eadon work wonders in capturing a warm yet articulate ambience for these physically imposing and richly detailed scores. Strongly recommended