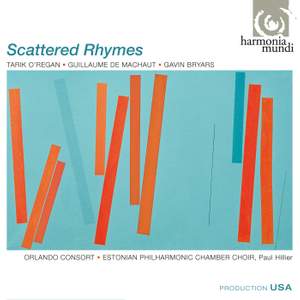 This collection has been programmed with considerable care. Machaut's glorious Messe de Nostre Dame forms its centre, both in terms of its musical substance and its famously provocative rhythmic... — BBC Music Magazine, June 2008, 5 out of 5 stars More…

Machaut's extraordinary Messe de Nostre Dame was not only the first complete mass setting in history, but also the first whose composer can be identified, making it emblematic of the Ars Nova style of the 14th century. In this recording, the Orlando Consort performs the mass in parallel with a work by Tarik O'Regan (born in 1978) which was inspired by it. Scattered Rhymes links two texts from the same period as Machaut's mass, one by Petrarch, the other an anonymous English poem. Both of them subtly combine earthly and divine love, while the music blends polyphonic tradition and contemporary inspiration.

Two-time British Composer Award winner Tarik O'Regan was educated at Oxford University and completed his postgraduate studies at Cambridge. He now divides his time between Trinity College, Cambridge, where he is Fellow Commoner in Creative Arts, and New York City, where he has held the Fulbright Chester Schirmer Fellowship at Columbia University and a Radcliffe Institute Fellowship at Harvard.

Gavin Bryars, born in Yorkshire, was first of all a jazz bassist and pioneer of free improvisation with Derek Bailey and Tony Oxley. His early iconic works The Sinking of the Titanic (1969) and Jesus' Blood Never Failed Me Yet (1971), both enjoyed major recording success. He has written extensively for early music performers such as the Hilliard Ensemble, Red Byrd and Trio Medieval, and for the Estonian National Male Choir and the Latvian Radio Choir.

The Estonian Philharmonic Chamber Choir's repertoire ranges from Gregorian chant to 20th-century music, with special emphasis on Estonian composers like Arvo Pärt and Veljo Tormis. Many of the Choir's recordings have received the highest critical acclaim, including 5 Grammy nominations and a Grammy Award (Arvo Pärt, Da Pacem).Their conductor, Paul Hillier enjoys close creative relationships with a number of contemporary composers, most notably Steve Reich and Arvo Pärt. In 2007, he prepared Stockhausen's Stimmung with Theatre of Voices for a UK tour and subsequent recording.

Since its formation in 1988, the award-winning Orlando Consort has been hailed as the most imaginative champion of vocal music of the Middle Ages and the Renaissance; it now records exclusively for harmonia mundi USA.

This collection has been programmed with considerable care. Machaut's glorious Messe de Nostre Dame forms its centre, both in terms of its musical substance and its famously provocative rhythmic and harmonic structure.

The four male voices of the Orlando Consort bring vigour and tonal variety to Machaut's Messe de Notre Dame, and its tenor Mark Dobell gives a lilting account of the composer's song Douce dame jolie. Tarik O'Regan's Virelai on the same tune then makes playful, contrapuntal use of its melodies.
His Scattered Rhymes, inspired by the Mass, pairs the Consort in medieval English poetry with Paul Hillier's choir in texts by Petrarch: a vivid meditation on earthly and divine love. The Consort's perceptive accounts of Du Fay's Ave Regina celorum and Gavin Bryars's Super flumina complete the picture.