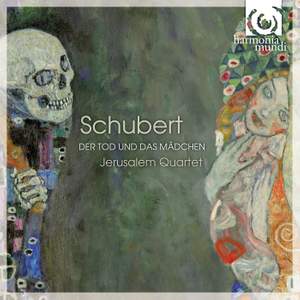 Schubert - Death and the Maiden & Quartettsatz

The youthful Jerusalem Quartet… are to be heard on an outstanding disc… Their mastery of rubato is as refined as that of any contemporary group, and this disc is as near to perfection as one... — BBC Music Magazine, June 2008, 5 out of 5 stars More…

Recording of the Week,  The Jerusalem Quartet

The former BBC New Generation Artists display ‘excitement and vitality’ in Schubert’s Death and the Maiden and Quartettsatz.

'Be comforted! I am not cruel; sleep in peace in my arms', murmurs Death to the Maiden in a song written in 1817, seven years before the quartet to which it gave its name and which has since become one of the pillars of the repertoire. Here is a new challenge for the members of the Jerusalem Quartet, whose most recent incursion into Romantic territory, with Dvorák's 'American' Quartet, received exceptional praise from Le Monde de la Musique for 'its virtuosity, its vitality, its energetic, buoyant phrasing'.

The youthful Jerusalem Quartet… are to be heard on an outstanding disc… Their mastery of rubato is as refined as that of any contemporary group, and this disc is as near to perfection as one can possibly find.

The superlative technical skills of these young Russian-Israelis, and a tendency to squeeze out every drop of expression, can actually obstruct the music they play so brilliantly. Thus, the natural sweetness of the D minor andante’s major-key variation is so overemphasised as almost to negate its purpose. That, however, is the obverse of their great virtues. Death and the Maiden is a haunted work, and the way they seize on the tiniest detail to increase the tension - a pianissimo tremolo, a brief, explosive forte - is often thrilling. They need only relax a little to be genuinely outstanding.

[The Jerusalem Quartet's] recording of Schubert's Death and the Maiden quartet finds them at their most uncompromising, with an epic, angry interpretation of a work usually considered elegiac and consolatory. From the furiously articulated opening chords, this is first and foremost a howl of rage against encroaching mortality. The integrity of the performance is never in doubt, and the playing is often breathtaking in its commitment and fire, but the unremitting bleakness of it all can be as forbidding as it is impressive. Its companion piece, the C Minor Quartetsatz, is similarly interpreted in the starkest of colours, with the dialogues between the first violin (Andrei Pavlovsky) and cello (Kyril Zlotnikov) sounding not so much like duets as duels. An admirable disc, though one that's also hard to like.

Passion and a feverish energy characterise this young Israeli quartet. First up is Schubert’s magnificent Quartettsatz, and the temperature continues for Death and the Maiden. Yet they’re never undisciplined – the cellist even keeps his head playing Jacqueline du Pré’s cello (loaned by Daniel Barenboim). Other groups get closer to Schubert’s tender side, but for racing blood, go to Jerusalem.