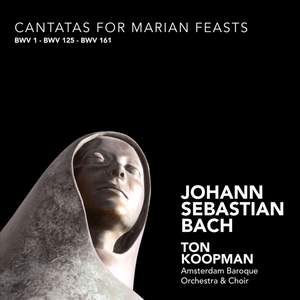 This group of cantatas, which have been selected from the award-winning cycle of recordings of the complete cantatas of J. S. Bach by Ton Koopman and the Amsterdam baroque Orchestra and Choir, were written for the three Marian Feasts. They not only show magnificent orchestration but also a particular degree of elaboration. Hence, the overall design of these cantatas is noticeably different from that of those written for the ordinary Sundays of the Epiphany and Trinity seasons. The cantata “Wie schön leuchtet der Morgenstern“ BWV 1 for the Feast of Annunciation dates from 1725 and is based on the hymn by Philipp Nicolai that makes use of an older melody. The chorale cantata „Mit Fried und Freud ich fahr dahin“ BWV 125 was composed about two months earlier and performed at the Feast of Purification in 1725. Its text is based on the hymn by Martin Luther. “Komm, du süße Todesstunde” BWV 161 was originally written for the 16th Sunday after Trinity and probably received its first performance in the Weimar castle church on September 27 1716.

As an organist Ton Koopman has performed on the most prestigious historical instruments of Europe, and as a harpsichord player and conductor of his Amsterdam Baroque Orchestra & Choir he has been a regular guest at venues which include the Concertgebouw in Amsterdam, and the Theatre des Champs-Elysées in Paris. In 2006 Ton Koopman was awarded the Bach Medal by the city of Leipzig in recognition of his major contribution to Bach performance and scholarship.