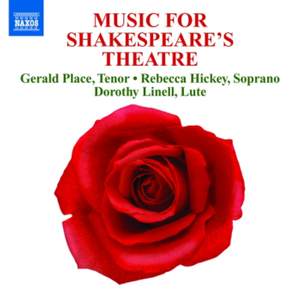 When Daffodils Begin to Peer

Fear No More the Heat o' the Sun

trad.: When That I Was

Byrd: How Should I Your True Love Know?

And Will He Not Come Again?

In Youth When I Did Love

Morley: The First Book of Ayres or Little Short Songs

Christopher Marlowe: Come Live With Me

Music played an important role in the Renaissance theatre and Shakespeare brought new subtlety to its use. In a theatre without lights and sets, it fell to music to underline mood, whether for magic, comedy, feasting or pathos.

Here are thirty or so settings from Shakespeare’s lifetime by composers including Morley, Johnson, Dowland, Byrd, Ferrabosco and others, including lyrics set to ballad tunes that would have been very familiar to the actors in his company.