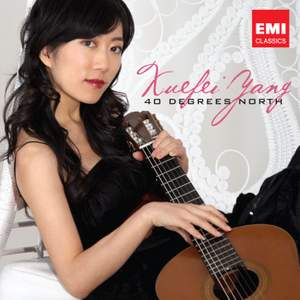 From Beijing to Wimbledon, this is consummate guitar playing from a lady with no equal. — Classic FM Magazine More…

Fang He, Stephen Goss: The Chinese Garden: I. Jasmine Flower

Tárrega: The Carnival of Venice (Variations on a Theme of Paganini)

Xuefei Yang was not only the first guitarist in China to enter music school and later to graduate from the Central Conservatory of Music in Beijing with a Bachelor of Arts degree, but she was also the first Chinese guitarist to study classical guitar in the West.

The disc is so titled because the capital cities of both countries lie near latitude 40 degrees north. As Yang says: “To me, this parallel has come to symbolize the connection I feel to the music of both countries.”

The Spanish repertoire includes original solo guitar compositions (such as Tárrega’s Carnival of Venice) as well as arrangements of pieces written for piano or two guitars (Albéniz’s Seguidillas). Many of these works appear in new arrangements by Yang herself.

Since China has no established guitar repertoire of its own, the Chinese pieces on this recording originate either from arrangements of traditional Chinese pieces (including two traditional Chinese folk songs arranged for guitar by Gerald Garcia), or new compositions based on Chinese themes (such as Welsh composer Stephen Goss’s Chinese Garden, written especially for Yang).

From Beijing to Wimbledon, this is consummate guitar playing from a lady with no equal.

One of the most satisfying and well thought-out classical guitar programmes I've heard in a long while… Yang's playing exhibits that kind of subtle intelligence that makes even the most disparate elements seem effortlessly to cohere.