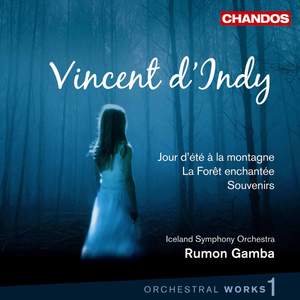 Most record lovers will be drawn primarily by Jour d'été à la montagne. Rumon Gamba, eliciting controlled and delicate playing from the orchestra in the other two works, does so again here. — BBC Music Magazine, May 2008, More…

D’Indy was a contemporary of Debussy and Ravel, and a pupil of César Franck. Fauré described him as ‘The Samson of Music’ for his multifarious and generous-minded work as a composer, conductor, educator and propagandist who greatly strengthened French musical culture.

Today the music of d’Indy is sadly neglected, which is why Chandos and the Iceland Symphony Orchestra have decided to embark upon a series devoted to his orchestral works with conductor Rumon Gamba. With a style essentially eclectic and strongly influenced above all by Beethoven and Wagner, d’Indy particularly excelled in orchestral composition. He drew particular inspiration from his native region in southern France, and formed a body of post-romantic works richly orchestrated, often inflected with folk-like melodies and employing Franck’s well-known ‘cyclic method’.

The series begins with a programme of in part rarely performed works, including the outstanding Jour d’été à la montagne, Op. 61, a work of d’Indy’s full maturity, composed in 1905. This cyclic three-part evocation of a day in the Ardèche mountains is full of impressionistic details and orchestral nature painting, partly influenced by Debussy but essentially classical in tonal structures. It is complemented by the early La Forêt enchantée, Op. 8 and largely contemporaneous Souvenirs, Op. 62, which d’Indy composed as a memorial to his late wife.

Most record lovers will be drawn primarily by Jour d'été à la montagne. Rumon Gamba, eliciting controlled and delicate playing from the orchestra in the other two works, does so again here.

Three of d'Indy's most colourful works show him not only as an impressionist in a Debussian mould but also influenced by Wagner and folk music from his own culture. La forêt enchantée (1878) is described as a 'légende-symphonique' and is inspired by an epic ballad by Ludwig Uhland. D'Indy creates a mysteriously expectant opening atmosphere, then Knight Harald and his followers ride out vigorously. Female elves seduce his followers, but Harald loftily resists their enticements and gallops off to reach an enchanted spring, where the elves are waiting for him. This time he yields to their alluring invitation before slipping into a 'centuries-lasting' sleep.
By the time the masterly Jour d'été à la montagne was written some 30 years later, d'Indy's style had matured. While the Wagnerian sensuality remains, here the influences from Debussy and even Ravel are very potent: there's a daybreak with an orchestral chorus of birds. The sultry central movement, 'Après-midi sous les pins', includes lively folk dancing before the clouds arrive, with thunder in the distance. Twilight transforms the mood for 'Soir' and the work closes in nocturnal bliss.
D'Indy wrote Souvenirs almost immediately afterwards (in 1906) in memory of his wife (represented by a leitmotif, Bien-Aimée), recalling the couple's idyllic summers together and again evoking the countryside. This idée fixe is continually transformed before the music darkens and 12 harp harmonics set the time of Isabelle's death at midnight; the evocation ends in sad serene acceptance.
The rich orchestration in all three works is superbly realised by the excellent Iceland Symphony Orchestra under Rumon Gamba and the state-of-the-art Chandos recording; definitely a key record of d'Indy's orchestral output.

The rich orchestration in all three works is superbly realised by the excellent Iceland Symphony Orchestra unde Rumon Gamba and the state-of-the-art Chandos recording; definitely a key record of d'Indy's orchestral output.

The orchestra, under its music director Rumon Gamba, has no problem warming to the Ardèche summer's day so evocatively conjured up in d'Indy's tone poem Jour d'été à la montagne of 1905. And with some exceptional playing it delves deep into the Wagnerian world of La Forêt enchantée and explores the changing moods of Souvenirs. It is all aided by a sumptuous recording.