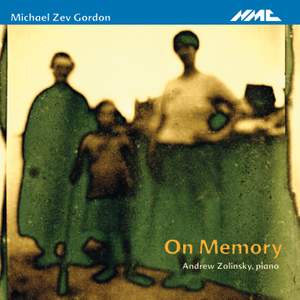 On Memory (2003-04) is the big project here, a 12-movement suite that takes past musics, memories, associations and techniques and gently jumbles them up. Couperin emerges from blurred depths... — Gramophone Magazine, February 2010 More…

No. 1. this departing landscape

No. 4. unbitten in the palm

No. 7. a space in which one might fall back

No. 9. sepia-coloured … the white mare … far, far down by the stream

"A wonderful snapshot of music being written in Britain now. Better still, these pieces have been written for us all to play." THE OBSERVER

Gordon studied composition in the UK with Robin Holloway, Oliver Knussen and John Woolrich, in Italy with Franco Donatoni and in the Netherlands with Louis Andriessen.

Awards include a 2004 Prix Italia for A Pebble in the Pond, an extended radiophonic work on the subject of memory; and winner of the choral category of the 2008 British Composer Awards, for This Night, written for the choir of King’s College, Cambridge.

The works on this disc span nearly twenty years of Michael Zev Gordon’s output and demonstrate the development and change in his style from the atonal soundworld of Touch to the more recent harmonic, lyrical qualities of On Memory, a series of miniatures inspired by the way our brain conjures up hazy memories. Gordon uses a Couperin keyboard piece, a Bach Sarabande and a fragment from a Klezmer dance as starting points, which provide a brief moment of recognition before tailing off into blurry soundworlds.

On Memory (2003-04) is the big project here, a 12-movement suite that takes past musics, memories, associations and techniques and gently jumbles them up. Couperin emerges from blurred depths in the second piece. Bach is played mostly backwards in No 4. No 9 gives us shards of Ravel, Henry Mancini and Janácek while No 11 elides Chopin and Bill Evans. The attitude may be stigmatised as postmodern but the composer is anxious to fashion an expressively charged language for each link in the chain: it isn't just a game. Andrew Zolinsky is the dedicatee of On Memory and the music suits his contained, super-refined piano sound.