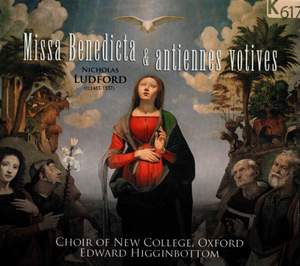 The music of Nicholas Ludford has been discovered only relatively recently.This CD of a capella music was recorded in the glorious acoustic of St Martin de Hoff on the outskirts of Sarrebourg, a perfect environment for this extraordinary 16th century music. It includes the Missa benedicta et venerabilis with plainsong propers and the votive anthems Domine Jesu Christe and Ave cuius conceptio.

Under Edward Higginbottom's leadership, the Choir of New College Oxford has gained a worldwide reputation and is known particularly for its stylish performances of Renaissance and Baroque music. New College's founder, William of Wykeham, envisaged in the 14th century: a choir of 16 choristers and clerks whose duty was, and still is, to provide a sung liturgy in one of the grandest chapels to be built in Oxford.

Scrupulous scholarship, masterful conducting and committed singing merge to restore the legacy of one of England's most inventive 16th-century composers.

Though not as showy as Taverner, Ludford's more understated idiom is every bit as persuasive. Repeated listening reveals great subtlety in the handling of texture, an exhilarating sense of confidence in formal planning, and real melodic inspiration. The opening of each movement is identical, and excludes the trebles, whose subsequent appearance in a different context is nicely managed.
From the point of view of repertoire this is a major issue.
Here, New College's trebles show how much young singers can achieve in the way of cohesiveness, coherence and sheer persuasiveness of melodic shape. That speaks volumes, considering that, of all the English choral repertory written for trebles, this is perhaps the most difficult for today's youngsters to master. It's difficult to argue that adult female singers are demonstrably better equipped than boys: the advantage of bigger lungs is offset by the careful choice and placement of breaths. For the rest, the tone of these particular trebles is expressive in itself.

I've long admired New College's trebles, and here they show how much young singers can achieve in the way of cohesiveness, coherence and sheer persuasiveness of melodic shape.

New College, Oxford are in a class of their own.

Listening to these superb performances, it seems extraordinary that Nicholas Ludford is not already fully acknowledged as one of early 16th-century England's most talented composers.
Both in the Missa "Benedicta et venerabilis", and in two extended votive antiphons, his deliciously euphonious polyphony abounds in the long, soaring lines, quirky turns of melodic and harmonic phrase and thrillingly sonorous climaxes characteristic of this repertoire.
It also has a graceful elegance all Ludford's own, to which this joyously committed singing does full justice.