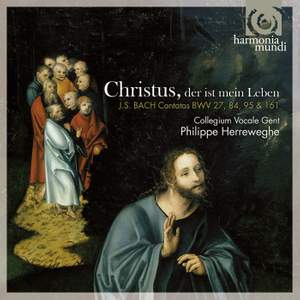 Cantata BWV 84 for solo soprano falls to Dorothee Mields, an affecting Bach singer whose linear clarity and fresh, somewhat boyish vocal timbre enhances the music at every turn. Her contribution... — BBC Music Magazine, May 2008, 4 out of 5 stars More…

Although Bach had dreamt of establishing a ‘well-regulated church music’ since his early days, it was only between 1723 and 1750 that he finally had the chance to do so, as Kantor and Director Musices in Leipzig. Here he invented the ‘modern’ cantata, combining chorales and traditional biblical texts with arias and recitatives on freely composed texts.

The four cantatas recorded by Philippe Herreweghe offer a magisterial demonstration of the transition from cantatas initially judged ‘too theatrical’ to a perfectly achieved form - as in the cantata BWV 84, among the very last to be written.

The four works assembled on this recording document by Philippe Herreweghe offer a magisterial demonstration of the musical development of the Bach church cantata over a period of some twelve years. The cantata Komm, du süße Todesstunde BWV161 was probably written for a performance in Weimar on 27 September 1716. Its libretto comes from a cycle of poems published in 1715 by the Weimar court poet Salomon Franck, and was appointed for the 16th Sunday after Trinity. Christus, der ist mein Leben BWV95 belongs to Bach's first Leipzig Jahrgang, and was written for performance on 12th September 1723; it is associated with the same Sunday as its Weimar sister work BWV161.A third work conceived for the 16th Sunday after Trinity is the cantata Wer weiß, wie nahe mir mein Ende BWV 27, written in the framework of

Bach's third Leipzig cycle for a performance on 6th October 1726; here again the central focus is on the themes of yearning for death and the certainty of resurrection.

Ich bin vergnügt mit meinem Glücke BWV84, is a virtuoso bravura piece for solo soprano, probably written for performance on 9th February 1727, and therefore stands at the end of Bach's third cycle for Leipzig, with which the composer ceased his regular output of cantatas.

Cantata BWV 84 for solo soprano falls to Dorothee Mields, an affecting Bach singer whose linear clarity and fresh, somewhat boyish vocal timbre enhances the music at every turn. Her contribution to Bach's playful trio setting with two oboes d'amore of the chorale melody which we associate with the hymn 'All glory, laud and honour' (BWV 95) is captivating.

Herreweghe brings a sense of period-instrument luxury to these cantatas.