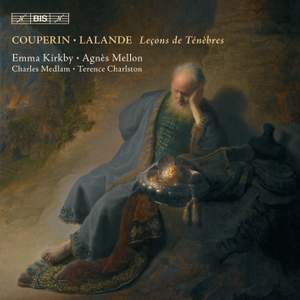 Couperin's Leçons de ténèbres are justly celebrated, their intense yet intimate sound-world reflecting both the agony and the ecstasy of these texts. …the crystalline purity of Emma Kirkby's... — BBC Music Magazine, April 2008, 4 out of 5 stars More…

The Leçons de Ténèbres gathered here are some of the finest in the genre. By the time of Couperin and Lalande, a practice of singing the Lamentations of Jeremiah during Holy Week had been established in which the text was divided into nine ‘lessons’ sung over three days, with one candle of a special candelabra being extinguished after each lesson, until ‘tenebrae’ or darkness was achieved on Good Friday. The three Leçons by François Couperin, composed for the royal monastery of Longchamp c. 1714, are highly regarded. (Couperin himself at one time referred to a full set of nine lessons, but only the three for Holy Wednesday are known today.) Couperin, named ‘Organiste du Roi’ in 1693, was the colleague of de Lalande, ‘Maître de Chapelle’ at the French court, whose own Leçons were composed for the royal chapel.

Couperin's Leçons de ténèbres are justly celebrated, their intense yet intimate sound-world reflecting both the agony and the ecstasy of these texts. …the crystalline purity of Emma Kirkby's soprano offsets the smoky tones of Agnès Mellon. Eloquent restraint and internalised ardour combine in these sensitively judged accounts. Less well known than the Couperin are Lalande's hypnotic Tenebrae settings... These are, in short, performances of infinite tenderness, profound affection and mature insight.

When the two voices swell fervently there is a sense of emotional arrival, mutual enhancement and discovery.