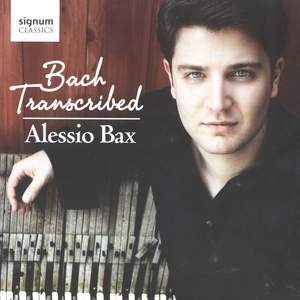 Bach, J S: Gavotte (Tempo di Borea) from the Vioin Partita No. 1 in B minor

Bach, J S: Andante from the Violin Sonata No. 2 in A minor

Bach, J S: Chaconne from the Violin Partita No. 2 in D minor

It is a sign of the brilliance of J.S. Bach that great pianists have chosen to recreate and reinterpret his works in so many ways.These performances by star pianist Alessio Bax capture the reverence and resplendence of Bach's music in 13 great transcriptions. Since taking first prize at the Leeds International Pianoforte Competition in 2000, Bax has won audiences across the globe. On April 23rd he was awarded the Avery Fischer Career Grant for 2009, presented once a year to talented instrumentalists who show great potential for solo careers, following in the footsteps of previous winners Joshua Bell, Hilary Hahn and Gil Shaham.

"Alessio Bax made his first entry and it was clear within minutes that here at last was a pianist with the style, the sound, the breadth of technique and, above all, the ability to listen and participate in a spontaneous give-and-take interpretation with Sir Simon Rattle and the CBSO." The Times

In the realm of Romantic Bach transcriptions, Alessio Bax's stylistic perception and palette of tone-colours have considerably deepened since his "Baroque Reflections" release (Warner, 11/04), together with a level of technical control that gives new meaning to the word "awesome". A disc no "hyphenated Bach" fan should miss.