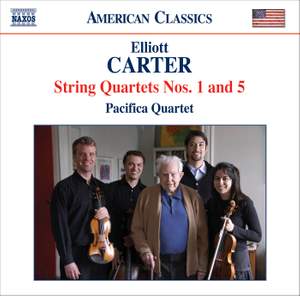 In No 1 (1951), the Pacifica find a near-perfect balance between the driving intensity of the Arditti and portentous grandeur of the Juilliard. In No 5 (1995) they, like the Arditti make the... — Gramophone Magazine, April 2008 More…

Released to celebrate the American master Elliott Carter’s centenary, this is the first of two discs of the complete String Quartets. Carter himself has written: ‘I probably decided to write what was to be the First Quartet when I read about a composition prize in Liege, Belgium, because there are many ideas swarming around in my imagination about expression, rhythm and harmony mostly derived from my Cello Sonatas …. Then my Second, Third, and Fourth Quartets developed my imaginings in different ways until I began to realise that soon I would exhaust this direction, and so my Fifth Quartet became a farewell to the previous four and an exploration of a new vision’

In No 1 (1951), the Pacifica find a near-perfect balance between the driving intensity of the Arditti and portentous grandeur of the Juilliard. In No 5 (1995) they, like the Arditti make the most of its alternation of outwardly spontaneous and rigorous sections, yet the sense of tension and release is even more capricious.

The Pacificas launch a complete cycle of his string quartets with the imposing First (a breakthrough in metrical complexity) paired with the airier, swifter Fifth. Naxos do composer and musicians proud, with clear sound and a good spatial spread – essential for catching the tumbling notes. Music with heart as well as a brain; and a great Naxos bargain.