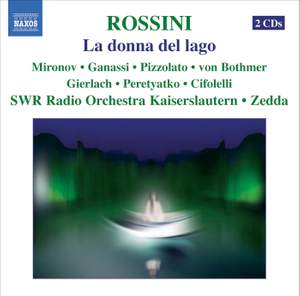 Like the excellent Opera Rara recording (reviewed above), this new Naxos set was also made live in 2006. An excess of mid-act applause notwithstanding, it offers yet another distinguished account... — Gramophone Classical Music Guide, 2010 More…

First staged in Naples in 1819, Rossini’s opera La donna del lago is based on Walter Scott’s romantic poem The Lady of the Lake, setting a precedent for later composers, who also drew on Scott for their plots. Set in exotic 16th century Scotland, the opera deals with the conflict between the Highland clansmen under Douglas and King James V, who generously forgives his enemy and allows the betrothal of his beloved Ellen, Douglas’s daughter, to his former enemy, Malcolm.

Like the excellent Opera Rara recording (reviewed above), this new Naxos set was also made live in 2006. An excess of mid-act applause notwithstanding, it offers yet another distinguished account of the score. Key to the set's success is the cast of rising young stars of the Rossini circuit which veteran conductor and Rossini editor Alberto Zedda has assembled.
Maxim Mironov is memorable as the King and there are equally compelling performances by Sonia Ganassi, Marianna Pizzolato and Ferdinand von Bothmer. The set faces stiff competition from Philips's budget-price reissue of the Muti but it is a more than useful addition to the La donna del lago discography.

This budget choice may look like the least starry recording of Rossini's 'Scottish' opera - but it's my top choice by some way, not least for the vital singing of the two mezzos. Sonia Ganassi's sound is darker and more dramatic than many Elenas, but she infuses it with all the necessary vulnerability, and Marianna Pizzolato's soft-grained Malcolm is also a joy. The sweet-toned young Russian tenor Maxim Mironov is one to watch in this repertoire.