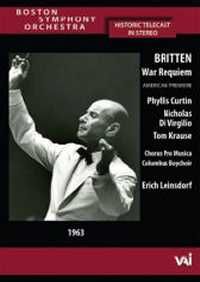 Although visually showing its age, the stereo sound on this broadcast of the American premiere of the War Requiem sounds remarkably fresh and vivid, and Leinsdorf is authoritative. — BBC Music Magazine, April 2008, 4 out of 5 stars More…

An outspoken pacifist, composer Britten combined texts from the Latin Mass for the Dead with the sharply poignant writings of the World War I poet Wilfrid Owen to create one of the most gripping works of the modern classical repertoire. This video presents the historic 1963 American premiere of the War Requiem, as performed by the Boston Symphony Orchestra under the direction of its Music Director, Erich Leinsdorf. The soloists are Phyllis Curtin, soprano; Nicholas Di Virgilio, tenor; and Tom Krause, baritone. The DVD boasts a magnificent stereo soundtrack drawn from the Boston Symphony archives.

Although visually showing its age, the stereo sound on this broadcast of the American premiere of the War Requiem sounds remarkably fresh and vivid, and Leinsdorf is authoritative.

'It makes criticism impertinent,' thought Peter Shaffer of the War Requiem, and for all Stravinsky's grousing that any such criticism would be 'as if one had failed to stand up for God Save theQueen' the piece still carries as much sense of occasion as it evidently did at this, its American premiere in 1963, a year after its fraught first performance. What a contrast. The al fresco acoustic of the Tanglewood Music Shed may have been no more favourable in its way than that of Coventry Cathedral, though, you might think miraculously, there is no trace of indistinctness or inadequacy about the stereo sound preserved by WGBH Boston to accompany its telecast.
Nor is there about the performance, which was evidently prepared with all the care that such an occasion merited. The hero of the hour is preeminently Leinsdorf, who picked the work as the centrepiece of his first season as Tanglewood's music director. Whatever else the WarRequiem stands for, its performance here serves as a conducting masterclass. Leinsdorf stands ramrod-straight, no baton, and his timing and pacing are equally impeccable, honed by his years in the pit at the Met. When he raises his left hand, infrequently, it is either to conduct the chamber ensemble to his left or to indicate 'too loud'. When both arms are aloft and the eyes blaze at the climax of the Sanctus, on the upbeat to the 'Hosanna', the response is electrifying, as though all heaven's angels had joined the already excellent Chorus Pro Musica.
It would be easy but misleading to equate the unyielding body language with the interpretation: a strict, dry-eyed tempo for the 'Lacrymosa' makes all the more sense when it eventually contrasts so poignantly with the tenor's desperate cry of 'Was it for this the clay grew tall', as though the ancient liturgy was cracking under the strain of expressive necessity.
The booklet-note accurately summarises Nicholas Di Virgilio's contribution as having 'a robust and honest American style', though he rises to the challenge in the brief but crucial Agnus Dei and is less troubled by the passaggio between D and F than many Britten tenors past and present. As Di Virgilio does elsewhere, the Finnish baritone Tom Krause perhaps responds more to Britten's setting than to Owen's poetry in 'Be slowly lifted up', though the trumpet obbligato is something of a highlight, and the singer ratchets up the tension for the apocalyptic recapitulation of the Dies irae. Phyllis Curtin's soprano matches Leinsdorf for unobtrusive clarity – and she never scoops, despite every Verdian invitation to do so. A one-off event invites excuses for slips of all kinds, but there are none, and the breathless hush from the 11,000-strong audience suggests that the stoic power latent in Britten's testament affected them as it might anyone watching 44 years hence.

A relative once told me
of being in Israel for the national premiere of Britten’s War Requiem. There was a hush at the end, nobody seeming quite sure how to react to such an original, startling work. Then, as they say, the roof came off. Some of that same sense of amazement can be felt
in this thrilling film of its US debut. It doesn’t hurt that the performance itself is electrifying.