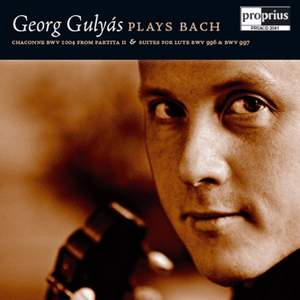 The Suite in E Minor and the Suite in C Minor, composed sometime between 1707–17 and 1740–41 respectively, have been the subject of a great deal of speculation since no manuscripts of the works in Bach’s hand have been discovered. Nevertheless, scholars are agreed that the suites really were composed by Johann Sebastian Bach though whether he actually intended them for the lute is still a matter for discussion. Perhaps Bach himself would not have expended much time on such speculation since he freely transcribed his works for different instruments often shifting to keys that best suited the intended instrument.

“Having now worked so intensively with Bach’s music in preparing this recording, I have again been reminded that his compositions constantly offer new discoveries. And this is one of the reasons why it is so rewarding to return yet again to his music, however familiar we may believe that we are with it.” Georg Gulyás